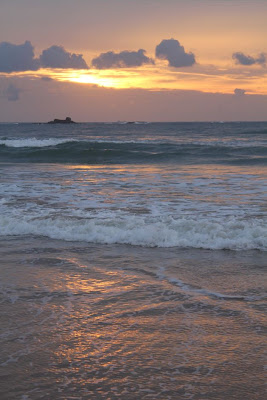 We had almost a week over the Christmas period at 3 different beaches in Southern Sri Lanka, Hikkaduwa, Unawatuna and Bentota and it was a wonderful family holiday. The boys are now 11 and 7 and keen to improve the surfing techniques, so we went to two good surfing beaches, Hikkaduwa for more advanced surfers, and Bentota, a good beach for beginners. 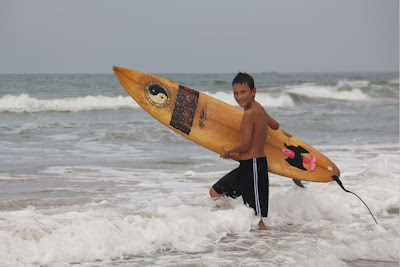 Ablai is really into surfing and handled some of the big waves at Hikkaduwa, but was more at home on the more moderate waves at Bentota 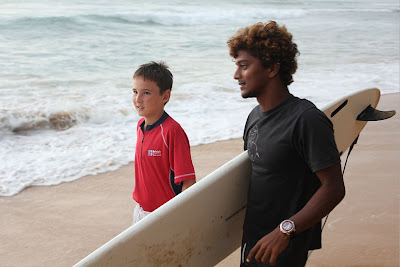 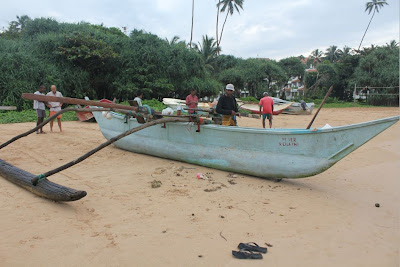 I have always been fascinated by outrigger canoes or boats. Here is a typical fishing boat in Sri Lanka, a main hull with a flimsy outrigger. Photo: Bob McKerrow. 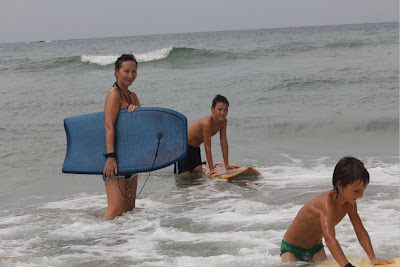 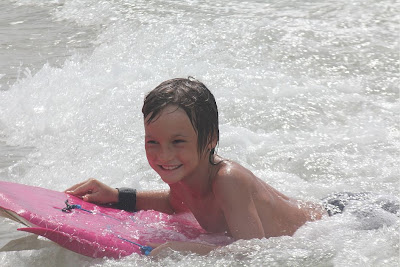 Mahdi on his boogey board and just loving to ride the waves.

A Close Call: On 21 December, we headed south to Hikkaduwa arriving about 1 p.m.
At 2 pm when we checked the surf the waves were really wild and only one or two locals were braving the thunderous conditions. About 4.30 pm, the waves looked surfable so I thought it would be important for Ablai (11) and me to swim out and get used to the waves that looked huge, but manageable, We had been practicing for two weeks in a local pool to get the arm strength and technique back. We dived through a few huge waves and,=  body surfed in and were starting to feel like getting a board to go out. Slowly something happened, almost inperceptably to the currents and a rip pulled us out like the arm of an invisible octopus was tugging us further and further away from shore.


We were in difficulties. What do you say to al ll year old whose Father was once like a fish in water, but slowing a little ? Do you say “don’t panic.” No ! “ Ablai,” I said, “we’re being pulled out, just tred water and save energy.”
“The waves will take us out, but later they will bring us in.”

I could see three local surfers relishing in the curling waves and flowing through tube like waves. After some minutes one of them noticed we were in difficulty. First Galem came up and said, “ Can I help.” I said, “yes, can you help Ablai to shore.”  I breathed a sigh of relief and being an ex Outward Bound instructor, recalled my words to students, “ You have to learn to push beyond your own self-imposed limitations, and find the real you.” The real me was either a drowned Bob, or a an exhausted water-filled Bob. 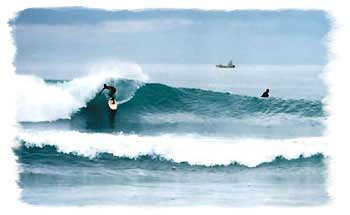 This was the type of surf we were experiencing, large waves with a rip pulling us further out to sea.

I was trying to conserve energy but was being pulled further out, but reassured Galem was helping Ablai closer to shore. Next this dreadlocked smiling face surfed up to me and said, “ Do you need help ? ”

My Mother used to teach me Genteelism, so I said ” my right arm is bit painful and I am not swimming as strong as I should, would you be so kind as to help.” First he gave me his lightweight board that acted more like a submarine but together we were able to make ground shorewards. The submerged board acted more like a plough and a few minutes later Sanjay turned up with Nadeem, who had a large surf board. With huge smiles om their faces, they gave me the board. Slowly with a little pulling and pushing from Sanjay and Nadeem, I got to shore 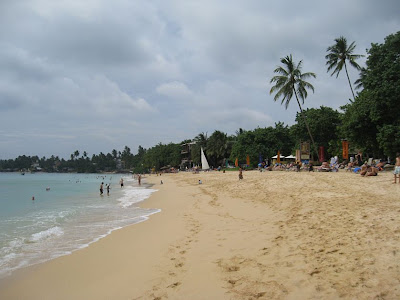 Unawatuna Beach, close to Galle. A wonderful swimming, boating and socialising beach, but not for surfing. Photo: Bob McKerrow 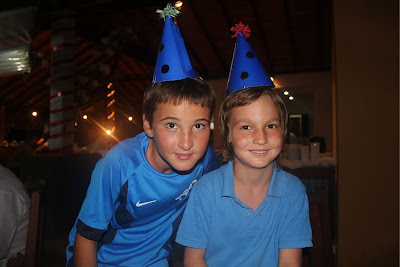 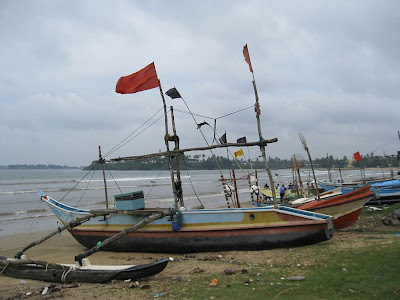 Often we would stop at small fishing communities such as this one close to Galle. Photo: Bob McKerrow 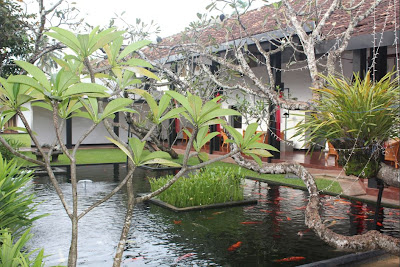 Geoffrey Bawa is Sri Lanka's most prolific and influential architect. His work has had tremendous impact upon architecture throughout Asia and is unanimously acclaimed by connoisseurs of architecture worldwide. Highly personal in his approach, evoking the pleasures of the senses that go hand in hand with the climate, landscape, and culture of ancient Ceylon, Bawa brings together an appreciation of the Western humanist tradition in architecture with needs and lifestyles of his own country. 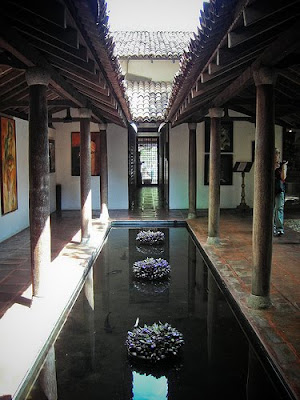 Throughout its long and colourful history Sri Lanka has been subjected to strong outside influences from its Indian neighbours, from Arab traders and from European colonists, and it has always succeeded in translating these elements into something new but intrinsically Sri Lankan. Bawa has continued this tradition. His architecture is a subtle blend of modernity and tradition, East and West, formal and picturesque; he has broken down the artificial segregation of inside and outside, building and landscape; he has drawn on tradition to create an architecture that is fitting to its place, and he has also used his vast knowledge of the modern world to create an architecture that is of its time.


So it was a relaxing holiday with many new sights.

On the 26th of December, we joined many other Sri Lankans, observersing a two-minute silence in remebrance of those who died in the Tsunami six years ago.
Posted by Bob McKerrow - Wayfarer at 19:30

Oh my god, there is really much effective info above!

Hey Guys, I has read your blog and got more information about Surfing Sri Lanka. Really, Sri Lanka is one of the best amazing places for surfing. Whenever, make planning for Surfing Sri Lanka please visit our site: http://www.theperfectwave.eu.com/

One should apply minimal pressure to lift these concrete grinders
and also hold it in flat motion while working.

The estimate you receive will be based on the number of skips you need, what
size skip you want, and how long you plan to keep it.
Flawless Flooring's polished concrete floor product boasts durability and decorative seamless surfaces made mainly from epoxy and polyurethane materials.

I like the valuable information you provide in your articles.
I'll bookmark your weblog and check again here frequently. I'm quite sure I'll learn a lot of new stuff right here! Best of luck for the next!

I love the sea, I likee surfing..

I am feeling so much delightful to find your blog. This is great information about surfing lesson for kids, Really so much informative.