Last evening we launched the 2010 World Disasters Report in Colombo Sri Lanka. Below is a photo of all of the guest speakers. 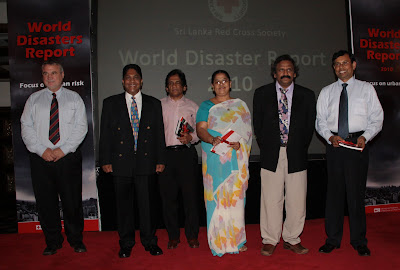 
COLOMBO, 14TH DECEMBER 2010 - The International Federation of Red Cross and Red Crescent Societies (IFRC) along with the Sri Lanka Red Cross Society (SLRCS) today launched the World Disasters Report in Sri Lanka with a warning that 2.57 billion urban dwellers living in low and middle income nations are exposed to unacceptable levels of risk fuelled by rapid urbanization, poor local governance, population growth, poor health services and, in many instances, the rising tide of urban violence in various parts of the world. Much of this urban population is also particularly exposed to climate change.

A key finding of the report is that between one-third and one-half of the population of most cities in low- and middle-income nations live in informal settlements and it is common in such cities for the local authorities to refuse to extend to them all the infrastructure and essential services that do so much to reduce disaster risk.

The report urges governments and NGOs to address the urban risk divide which exists between cities that are well-governed and well-resourced compared to those that struggle with a lack of resources, knowledge and will to ensure a well-functioning urban environment.

Bob McKerrow, IFRC Head of Delegation in Sri Lanka said: “In the present context many people live in towns and cities than in the countryside, however the world has failed to keep up with the rapid change in modern society. This is why more people live in slums or informal settlements than ever before and this will lead to more people being affected by urban disasters like the terrible earthquake which struck Haiti earlier this year”

The report states that the root cause of why so many people are affected by urban disasters is that a billion people live in poor-quality homes on dangerous sites with no hazard-reducing infrastructure and no services. In any given year, over 50,000 people can die as a result of earthquakes and 100 million can be affected by floods and the worst-affected are most often vulnerable city dwellers. 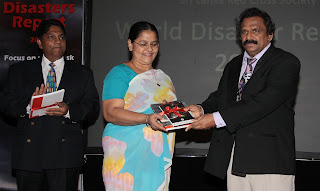 
Tissa Abeywickrama, Director General of the Sri Lanka Red Cross Society (SLRCS) said: “For over 7 decades the Red Cross Movement in Sri Lanka headed by the SLRCS has been in the forefront of helping vulnerable people from disasters, whether it’s manmade or natural. In the past we focused heavily on health and care issues and in the recent times towards rebuilding after the tsunami. We keep changing with the times and now there’s another issue which comes with the population growth, issues related to urbanization, which now we are venturing into in order to help solve this new crisis”

The report finds that forcible eviction is a constant threat to the urban poor. Large-scale evictions by public authorities displace millions every year, sometimes for re-development or beautification projects, or simply to target and remove what they consider undesirable groups.

The World Disasters Report points out that zoning and planning controls often exclude a large part of the urban population from legal land markets and advocates that building standards should be applied in a way that is appropriate to the local context including affordability and resistance to extreme weather.

For further information, or to set up interviews, please contact:

When we are providing Affordable Term Paper Service, we care about the career of all our clients. With any Legitiate Custom Research Papers Services that student requests from us, we have to use all the relevant resources that we have to write a quality paper and one that demonstrates an excellent understanding of the topic.