Ethiopia: “We are confident we will survive this drought”

I am keeping a very close eye on the worsening humanitarian situation in the Horn of Africa where I have a strong emotional attachment and many friends working there. I worked in Ethiopia in 1974 and again in 78-79 and know how devastating these droughts and famines are.  My second eldest daughter was born there in 1978 and worked some years ago in Ethiopia as a volunteer.Yesterday I had a SKYPE chat with my good friend Klaus Palkovitz who is working for Red Cross in Ethiopia and he updated me on what is happening. I was encouraged to read this article which appeared on our website yesterday which tells Mengiste Bala's story. She is one of the fortunate ones. 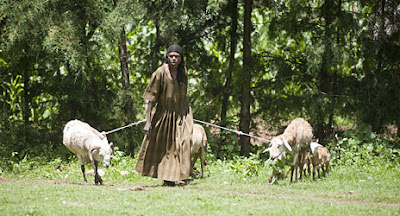 Mengeste Bala now has better food security with her seven sheep after the Red Cross programme. Michael Tsegaye/IFRC
Her livestock dead and crops ruined, Mengiste Bala and her twelve children were on the margins of survival in central Ethiopia. But this isn’t today. Two and half years ago, when the failed rains left her with no food or means to buy any, the Ethiopian Red Cross stepped in and provided her with food and some sheep. 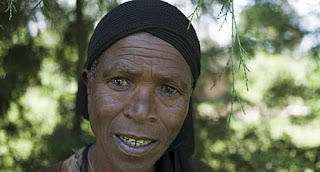 “At the time of the drought we were hungry. We lost all our assets. But the Red Cross came and gave us food, now we have hope to live,” said Bala (left), surrounded by her healthy looking children.
After initial food distributions in the emergency phase, the Ethiopian Red Cross started to help families recover and build their strength against future droughts. “Our initial priority was to give food, to save lives,” said Seifu Worku, Branch Secretary of the Wolaita region. “After survival, then we work on livelihoods. We must not only look at the short term problems,” he emphasised.
As a woman heading the household with a large number of children, Bala was given three sheep and seeds to plant maize and sorghum. She bred her sheep and sold them at the market. Now she has a cow, seven sheep and a thriving vegetable plot.


With the current drought in the Horn of Africa creeping further into Ethiopia, how does Bala feel about her near future? “I’m confident we will survive this drought. The rains are low but now my cow is grown, so soon I will have more cows to sell, and my family will be fine.” 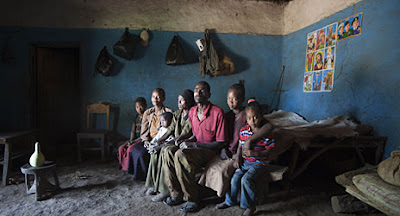 Mengeste Bala has twelve children, who dropped out of school during the last drought, but now she has better food security, they all go to school. Michael Tsegaye/IFRC
The Wolaita region of Ethiopia, around 4 hours drive south of the capital Addis Ababa is often referred to as a place experiencing a ‘green famine’. The population density is high at 400 people per square kilometre, so people only have small plots of land on which to grow their food. And without an additional income, one failed rain can leave a family hungry; in 2008 the region experienced two failed rains and many were left destitute.

The Red Cross response to this is to provide immediate assistance where necessary, as well as focus on the long-term food security of communities and vulnerable people. In Wolaita, this extends beyond seed and livestock distribution to the rehabilitation and extension of water sources.

In one example, an NGO built a water construction over 30 years ago which had fallen into disrepair as neither the skills not the spare parts were available in the community. The Ethiopian Red Cross has now repaired it and trained people how to maintain it. In Gacheno Kabele, one of villages that now have access to clean drinking water, children stand in a line, patiently waiting to fill their jerry cans, their donkeys braying in the background, waiting to be loaded up.

“For each jerry can we pay 25 cents” (less than 2 US cents), explains Workinesh Moya while supervising the filling. “This amount was decided by our water committee and means we have money to buy spare parts if we need to,” she added, demonstrating how they have learnt the lessons of the past.

Having water piped right into the community has made a huge difference to the lives of the women. “We used to have to spend half our day walking to the river to get water. All our time was gone. And sometimes even the river was dried up,” she says in exasperation. “And where we got water was swampy so the water was polluted and there was malaria. Now we feel healthier and can get clean water everyday, it’s good.”

The water filling station in this village serves 4,000 households, which could mean up to 24,000 people. “You can see the problem here,” says the Ethiopian Red Cross’ Seifu Worku. “There are too many people using this, there shouldn’t be a queue. So you can see that we still have more work to do. More pumps to build and more pipes to lay. But with support, we will do it for these communities.” 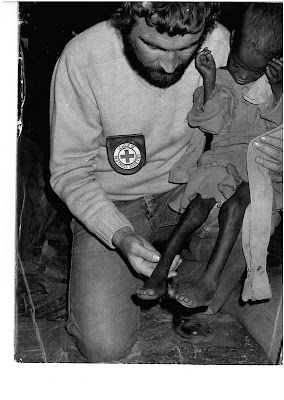 The IFRC has launched an emergency appeal on behalf of the Ethiopian Red Cross to seek funding not only for the immediate food needs in Southern Ethiopia, but also for projects like those in Wolaita, where a community is now stronger to face the tough months ahead.
Bob McKerrow with a severely malnourished child in Wollo province, Ethiopia in1978
Thanks to Faye Callaghan from IFRC, in Ethiopia for using part of her article.

Thanks my friend. We have to support each other in this dog-eats-dog world. Compassion must shine through!

I said: "The theologians really know
their topic; are these people smart like eighty-
one people quite like you together, so
just do like me and pray and trust them, Katie,

their knowledge adds to a tremendous mass
of safe and very holy gravitation!"
– "Oh yes?" said Katie, "What if all that jazz
is very simple at the final station

what do you say? I don't want to be rude
not even really to oppose your mission.
But tacitly this concept may include
an untold power, that's my slight suspicion,

I mean, that Truth was never too complex –
You may say 'God'; the real thing still is Sex!"

To live reactively, responsively, creatively, as an artist, act the way your life forms the best possible narrative, like a novel or a film, towards Death, End of the Story. According to Heidegger, Life is what Is. Sorge. Being kind of your own God? Primacy of Aestethics over Ethics.

Reciprocity! You do me a favor promoting YOUR blogs on mine.

I believe everyone must look at this.

Overall the times was a very exciting newspaper and
one which is very insightful into its readers needs.
Clearly, however, newspapers need to try harder to take advantage of new technologies to tell their stories in ways that attract
and involve readers, young or old. They’re the
real Mc - Coy and are as old as the date on their
front page. Thus, by putting the price, you get targeted customers
who are very interested in what you are offering; in other words, you get hot leads.
But I made it to a telephone and called Vito Genovese who was at that
time the most famous of New York's mafia bosses.

Next, blend the oils and massage into scalp for two
to four minutes before sleep. For the thick and curly hair,
it is best to use the Moroccan Oil. Black hair has a distinctive composition that makes it sensitive to breakage.
Yet, lack of moisture can also cause breakage, split-ends and brittle hair.
Exactly what the oil does is clean and exfoliate your hair follicles, help make your bloodstream circulate better all around your head and in return boosts
the process involving hair growth and acts as
being a supercharger for making your hair get bigger.


Have a look at my webpage olive oil for hair

This will give you an idea on the reputation of the company.
The newspaper printing machines available online these days are superior in
performance. This is where the online websites play quite a vital role.
Assemble your guests in teams, set out clues and people to actually talk to.
The second and major mutiny ends with a bang and not a
whimper.

Excellent website. A lot of useful information here.
I am sending it to a few friends ans additionally sharing in delicious.
And obviously, thanks in your effort!