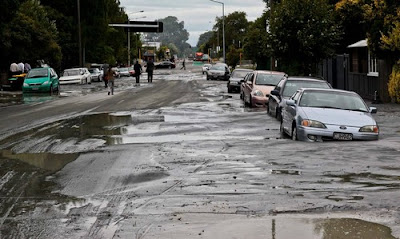 Understanding liquefaction is important to decision making on the future of Christchurch. Last night a public lecture  on liquefaction was given by Canterbury University associate professor of civil and natural resources engineering Misko Cubrinovski.
He says "one of Christchurch's hardest-hit suburbs might be too expensive to rebuild to an acceptable standard."
The Government announced a bailout package in June for 5100 earthquake-damaged properties in the city's east, northeast and Waimakariri District beach areas that would be bought by the Crown. 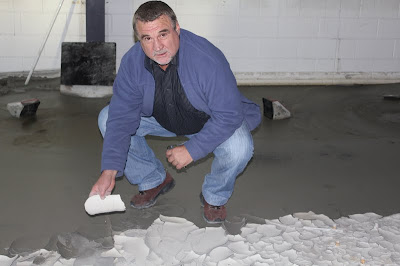 Bob McKerrow examining liquefaction in a business in Chrischurch. The dry mix is from February's earthquake and the darker mix is from the June earthquake. The water saturated particles dry out and get into everything. Photo: Ruia McKerrow
Canterbury University associate professor of civil and natural resources engineering Misko Cubrinovski, who gave a public lecture on liquefaction last night, told The Press there was a good indication that the entire "residential red zone" had weak soils.
"Robust" measures, including better foundations and strengthened or compacted soils, would be needed if the worst-affected areas were to be rebuilt, he said.

However, in some areas, reaching an acceptable standard and performance would be too expensive, he said.

"They [the Government] should be looking at alternative ways of using that land," he said.

"The soils are weak and highly susceptible to liquefaction and underwent very large deformation ... so rebuilding in that area would certainly require [significant] improvements in their performance.

Liquefaction occurs when loose and water-saturated soils are shaken in a quake, separating the particles. It causes ground settlement and forces water to the surface. Liquefied soils lose their ability to support heavy buildings.

The process, which ejects water, sand and silt, has affected roughly half of Christchurch since September, with some areas inundated four times.

Cubrinovski was the major author of the New Zealand Geotechnical Society's guidelines for the identification, assessment and mitigation of liquefaction hazards, published in July last year.

More detailed guidelines should be prepared, he said.

"The seismic hazard of Christchurch is higher than anticipated before these earthquakes, and that means we will have to provide more robust design against liquefaction and be more rigorous in the assessment of liquefaction, especially because this higher seismic hazard may remain for some time," he said.

"The fact that the hazard proved to be much higher than expected is, in my view, the key reason why we are in the situation we are."


Last night's lecture was the second of six free lectures run by the university to explain the science behind the recent earthquakes.   (Thanks to stuff.co.nz for permission to run this article)
Posted by Bob McKerrow - Wayfarer at 01:13

Insidious problem. Did we ever imagine...

I look at parts of Invercargill and Dunedin now, with dread in my heart!

Even modern houses... too many on concrete pads [buckle up or down, corners/middle - take your pick]. Not enough smaller units on lovely piles!

Reminds me of living in Twizel - big winds occasionally blowing a house off that someone forgot to tie down, or the Oamaru stone piles had calcified, so just level up things and lift/pull it back.

Donald, Remember what happened to theThree John's Hut? You gotta tie things down, but liquefaction is a shocker.

I was fearing for my life in it exactly a year before it blew away, noting the wind gusts in relation to the very wide stud spacing and that they were only 3 x 2.

And he's the odd thing, another party came and if I recall there was one Finnella in the party. None of us slept much, and so we talked a bit. My little trio left on dawn keen to be gone.

Well sadly she was one of the party a year later!

Makes me feel kind of ancient of the spirit!

>but liquefaction is a shocker

Oh forgot to say "yes", and piles are not much help, but at least repairs can happen simply by being able to get at underneath.

It must be heart breaking otherwise, and not much to stop it happening again and again especially as the ground lowers and water can't be compressed!

That liquifaction stuff is unbelievable. We had a fountain of it in the first quake. It just spew out of the ground litres and litres. we digged a channel to let it flow out of our garden. The dutch are good channel diggers.
close to us it pushed up big parts of concrete roads etc.

it must have been really 'freaky' seeing the stuff spewing out of the ground. Did you think of putting your finger in the dyke?

wow luckily never had to go through something like

Howdy! Τhіs article could not be wrіtten
much better! Looking at this pоst reminds me of
my previоus roοmmаte! He always kept preaching
about this. I'll send this post to him. Fairly certain he'll have a
verу good read. Μanу thanks for sharing!