Horn of Africa: Red Cross Red Crescent volunteers at the heart of the response

Having worked twice in the Horn of Africa, I am following this humanitarian tragedy closely and I am incedibly impressed by the work of the 120,000 Red Cross Red Crescent volunteers who are out there working with the affected populations: . Katherine Roux of the IFRC tells their story: Donate now: 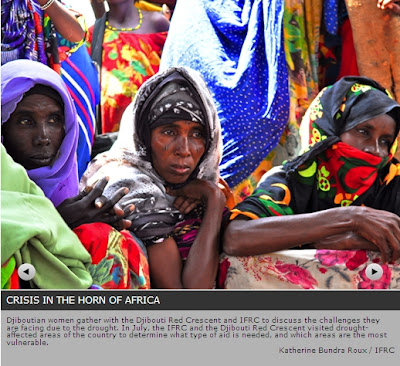 When Abdullahi Ibrahim, Kenya Red Cross Society volunteer in Tana River District, Kenya, was asked why he volunteers to help pregnant women in his community, the answer was simple: “I feel happy when I help someone,” he said.
In Djibouti, amid 40-degree heat and the fasting hours of Ramadan, Safia Houssein Awaleh, a Djibouti Red Crescent volunteer visits people door-to-door in her community to pass on health messaging. She proudly states: “I work for my country, to enrich the community where I live.”

Further west in the dry Oromia lands of southern Ethiopia, Guyo Golicha, a volunteer from Tuka village explains his motivation to be a part of the Red Cross movement is because “I know this area well, so I can make sure the Red Cross can reach every corner of the community.”

Abdulllahi, Safia and Guyo represent just a few of the 120,000 volunteers of Red Cross Red Crescent (RCRC) throughout the Horn of Africa responding to the drought. They are the individuals that drive the response at a community-level, which allows RCRC programmes not only to develop, but also to sustain, long after this seasonal drought ends.

As a part of the local community, these volunteers also have the trust of people around them. They speak the same language, live in the same neighbourhood, and face similar challenges during a drought. And to each of them, the current drought is not something new.


Headlines in the news will eventually change, and the world may soon forget about the chronic needs in the Horn of Africa in six months time. But life for these volunteers will not; each of them will continue living in Kenya, Djibouti and Ethiopia, in their respective communities long after this drought period ends. These are the volunteers, which are the strength of the Red Cross Red Crescent Movement.
Opinion Piece
If you are interested in reading more about the situation in the horn of Africa, I found this opinion piece written by Alexander Matheou enlightening as he explains how  politics, war and demographic changes are undermining the ability of nomadic populations to safely get through the cycles of drought. 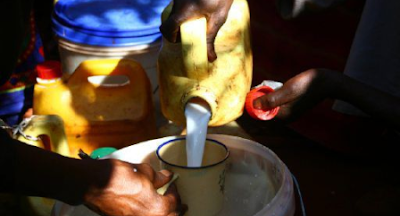 Pastoralist women dispense camel milk near Moyale, Somali region, Ethiopia. Alex Wynter/IFRC
Politics, war, migration: the anatomy of a humanitarian crisis
Another drought has hit the Horn of Africa, but we need to look beyond the lack of rain to find the reasons why these long, dry seasons become humanitarian crises, and these reasons should tell us something about how we need to respond.


When drought hits the Horn, the worst affected are the Somali communities, who live in the driest regions, crossing parts of Kenya, Ethiopia, Somalia and Djibouti.

For centuries these communities had mastered strategies to survive such cycles of drought: by reducing livestock to a manageable size at critical moments, and through ingenious pursuit of pasture and water across the arid lands.

Today it’s a different story. Many of the same survival strategies are still used, but politics, war and demographic changes are undermining their ability to see populations safely through the cycles of drought.

The borders of Kenya, Ethiopia, Somalia and Djibouti carve up the Somali lands and restrict the migration patterns that had historically been essential for pastoralist survival. Since independence, East African states had an inherent mistrust of nomadic peoples who had little interest in being governed by distant capitals rooted in alien languages and traditions. In Ethiopia and Kenya particularly, pastoralist movement was restricted, and they remained largely isolated from development agendas in other parts of the country.


Yet they couldn’t remain isolated from the effects of international agendas, both malign and benevolent in intent. Regional conflict and power games filled the arid lands with small arms, escalating low level disputes into bloodier, more decisive conflicts. Aid agencies flocked in, and unwittingly cultivated new traditions of dependency, propping up unviable lifestyles and engraining emergency aid into the everyday coping mechanisms of pastoralists.

This complex web of agendas was only the surface covering more seismic changes impacting on the viability of pastoralist life in arid lands, the most prominent being population growth. There are over four times as many people in Kenya and Ethiopia today than there were fifty years ago.
Pasture quickly becomes scarce under such human and livestock pressure, and extended dry seasons soon turn into crises.

In other words, inevitable and natural cycles of drought are just the straw that breaks the camel’s back – but they are not the cause.


Now it appears the camel’s back is broken again. Refugees are pouring across borders with alarming malnutrition rates, fighting is breaking out over the few remaining functioning boreholes, children are leaving schools and spending their days in search of water, livestock are dying and livelihoods are being lost. In humanitarian circles, people are beginning to whisper the word ‘famine’.


Much of this suffering could have been avoided by more early action. There were seasonal forecasts showing that the rains across the arid lands would fail. The right actions taken at the right time could have stopped many communities from tipping over into destitution. Yet despite all the lessons from previous droughts, and all the advances in early warning, government and public donors still don’t support mitigation work at the scale needed. Somehow, this must change.


Even now, there is much we can do to ensure the humanitarian response is appropriate.
First, we need to avoid the apathy trap that lingers around slow onset emergencies in the Horn. Recurrent crises have heightened the world’s tolerance of malnutrition and suffering in the region, but when a threshold is crossed, we must still be prepared to respond.


Secondly, while saving lives will always be the first priority, an underlying focus of humanitarian response should be to protect people’s capacity for economic regeneration. This will mean looking for flexible ways to provide assistance that avoid people moving into settlements from which they may never leave.


Thirdly, we need to keep listening to aspirations that people have for their lives. There are big shifts going on in the Horn: from pastoralist to agriculture, from agriculture to urban. Assistance should complement capacities to make these shifts successfully.


Fourthly, we need to focus on keeping children in schools. Their future options and resilience will be forever shaped by whether or not they have an education.

Finally, we need to remember that there is always a risk that the humanitarian community will shield governments from healthy accountability by taking over emergency relief. The best protection against cycles of drought becoming humanitarian crises lies with accountable government, and our work must assist, and not undermine, that end.

Emergency response is not going to address the root causes of this crisis, but well resourced and managed, it can at least help people through it.
On the 22 July 2011, the International Federation of Red Cross and Red Crescent Societies (IFRC)  launched an emergency appeal for 14.7m Swiss francs (17.9m US dollars / 12.4m Euros) to raise vital funds and provide assistance to the men, women and children who continue to face unimaginable suffering and hardship as a result of the worst regional drought in 60 years.

More than 3.2 million Kenyans are now classified as food insecure and in desperate need of assistance as a severe drought continues to ravage many parts of the country.

“Today we witnessed people simply collapsing from hunger and exhaustion, many having not eaten for several days,” says the IFRC’s Alexander Matheou who is in Turkana, the northwesternmost district in Kenya, one of the worst affected regions where malnutrition rates are double the emergency levels.
Donate now
Posted by Bob McKerrow - Wayfarer at 22:51

It's all wrong what you're writing.

You really make it appear really easy together with
your presentation however I find this topic to be actually one
thing that I think I might by no means understand.
It kind of feels too complicated and very broad for me.
I'm having a look forward for your next post, I will attempt to get the cling of it!

Here is my web site anuncios