Never ask a Frenchman to buy food for a mountaineering expedition 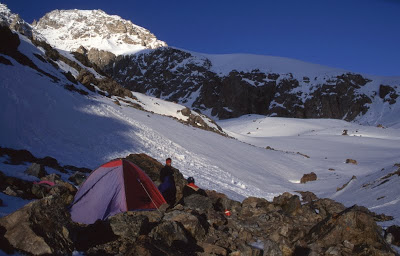 Our camp on Kohe Jalgya at 4300 metres. The peak is at the top left. Photo: Bob McKerrow


My last climb in Afghanistan was in June 1996. I got a group of mountaineers together; Mathias Luft from France, Ross Everson an Australian, and Bruce Watson an old friend from New Zealand who travelled all the way from New Zealand to join us.. In the previous three years of living and working in Afghanistan, I had done a number of trips in the Hindu Kush, and somehow I was attracted to a group of peaks known as Koh-e-Jalgya. Here was my last opportunity for my last trip into the Hindu Kush before I finished my contract working with the International Red Cross. 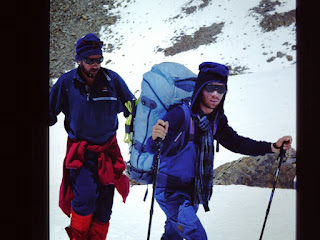 Mathias Luft (r) from France with Ross Everson,  an Australian, climbing up towards base camp on Koh-e-Jalgya.Photo: Bob McKerrow 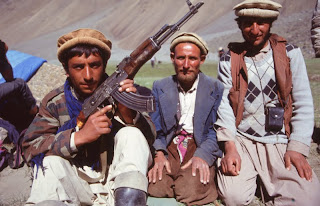 A group of local bandits I photographed and some days later they stole some of our equipment. Photo: Bob McKerrow

This was quite an expedition and the first mistake made, was letting a Frenchman buy the food without supervision. We ended up with pasta, stale and hard bread, rice, onions sugar and tea. There were no breakfast food, no milk powder, no salt, nuts, meat, chocolate meat or sardines. I wrote in my diary after six days we were starving. A group of armed locals stole equipment from us and Mathias was threatened by a soldier with an AK 47. 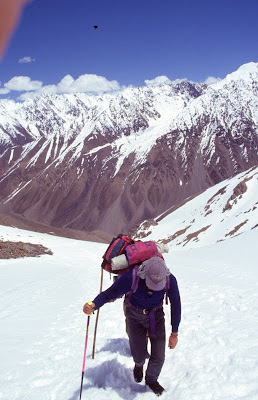 Approaching the Anjoman Pass from the Panjcher side of the Hindu Kush. In the background are peaks of Nuristan and Mir Sami to the right of centre. photo: Bob McKerrow

It took us five days to cross from the Panjcher Valley over Kotali Anjoman, down to Anjoman village, where we turned a sharp right up a side valley called Darrahe Paghar and set up a base camp at 4300 metres under Kohe Jalgya. The Anjoman Pass seperates Parwan province from Badakhshan province. 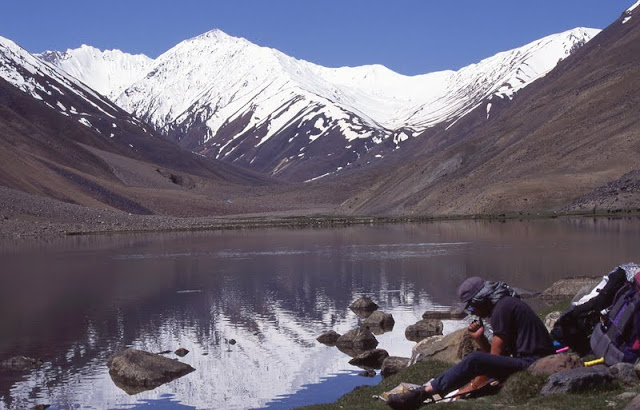 Our camp on the northern side of the Hindu Kush with Anjoman Pass the low depression to the right of centre. We spent a day here recovereing from a tiring crossing of the pass. Photio: Bob McKerrow 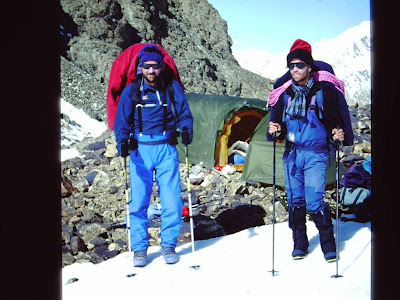 We soon realised that Kohe Jalgya was quite a technical climb and we didn’t have enough climbing equipment for such an ice climb. So Ross and Mathias headed for Kohe Jalgya and Bruce and I for another less technical climb, an unnamed peak at 5,300 metres. 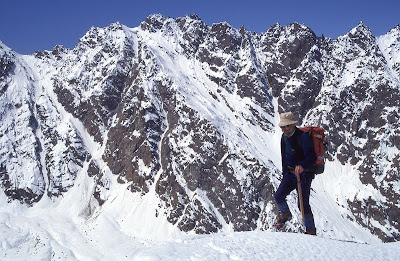 Bruce Watson on a high point about 4800 metres near to Kohe Jalgya. The range in the background is part of the Jalgya massif. Photo: Bob McKerrow

On the ascent of Kohe Jalgya, Ross and Mathias spent a night half way up the peak. They made good progress the next day but found the ice climbing difficult. After negotiating the hardest part of the climb, they came to a small snow field where they had to plug through waist-deep snow near the summit. They turned back at 4 pm on the 6th of June as the weather closed in. The descent turned into an epic in worsening weather. Mathias had two axes for front pointing down the face, but Ross only had one which slowed him down. Mathias gave Ross one of his ice axes, and he used one axe and an ice screw as a dagger, to descend. About 9 pm, Mathias lost footing and fell down an icy coliour and tumbled head over heals for 300 metres, just coming to a stop before a rocky bluff. Although cut and bruised, he was able to wal on alone trying to find the tent. Meanwhile Ross continued descending alone in the dark on steep ice. Now seperated by 300 metres, Mathias managed to stagger back to their tent situated on a snow ledge. Ross kept down climbing on ice another two hours, reaching the tent at midnight. 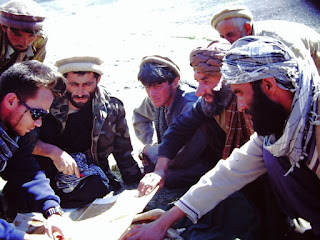 Mathias on the left with sunglasses, talking with a group of local Afghans trying to find the easiest access to our mountain group. Photo: Bob McKerrow
Meanwhile at base camp, Bruce and I were anxiously waiting, for they were a day late. We had eaten our last spoon of milk powder, and had no food left, not even a cooker to make tea.


So on Saturday 8 June, Bruce and I left a note and emergency equipment under a rock cairn, and said we were leaving for the valley to buy a sheep, cook it and come up with some locals to effect a rescue. 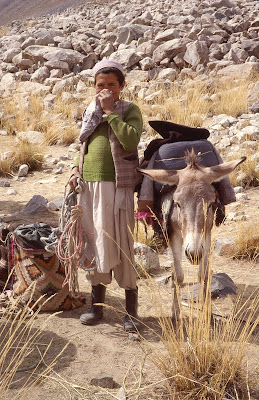 A young boy and his donkey in the Darrahe Paghar valley at the foot of Kohe Japgya. Photo: Bob McKerrow

We got down to a small hamlet in the valley about 4.30 pm and I glanced back at the mountain, and saw two specks slowly moving on the lower snow slopes of the mountain. It could only be Ross and Mathias. Bruce and I were elated. They were alive! We bought a stringy old female sheep and got the farmer to skin it, cut it up and boil it, preparing a feast for Ross and Mathias. Four hours later Mathias and Ross crossed the rising river, and joined us for a feast of mutton. Four days later we were back in Kabul. 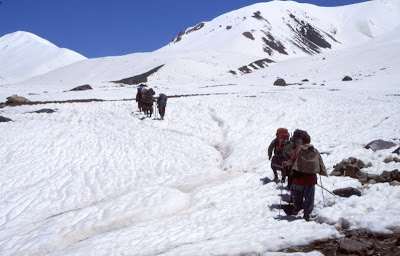 Climbing up to the Anjoman Pass from the Badakhshan side. Photo: Bob McKerrow
For further information on mountaineering in Afghanistan, try this:http://bobmckerrow.blogspot.com/2011/08/climbing-and-exploring-in-hindu-kush.html

That was quite an adventure wow and for such a climb with not enough food you must be very strong and made out of steel.
The pictures are gorgeous

Kia ora Bob,
I agree with Marja. Though I would have thought a Frenchman would have at least brought decent bread and a few bottles of red wine :)
Cheers,
Robb

Made of steel? Dogged and determined perhaps. These trips in Afghanistan were fun for the unknown factors such as bandits, bullet and landmines, added spice to it all. Now, 15 years later I look back and think, 'we were sailing close to the wind at times.'

Yeh, Mathias really let us down badly. I remember Bruce and I down to the last spoon of raisins at base camp and we had two missing climbing mates, and it was a five day walk to the nearest road. Such times call for resilience.

A bottle of wine, some bread and cheese would have been great to go with the raisins.

This won't really have effect, I consider like this.


Here is my blog: hcg diet side effects