The South Ridge of Aoraki/Mount Cook is to be renamed Hillary Ridge in honour of Sir Edmund Hillary.

Land Information Minister Maurice Williamson today confirmed a recommendation by the New Zealand Geographic Board to alter the name. ''Sir Edmund made an enormous contribution to our country and abroad and it is befitting and appropriate that his contribution is acknowledged in this way.''
Sir Edmund had a personal association with South Ridge which began when he was one of a party of four to make the first successful ascent in February 1948.
Photo above shows south ridge of Aoraki/Mount Cook in the right foreground, leading to the south summit. It is now the Hillary Ridge.
The three other climbers were guides Harry Ayres and Mick Sullivan, and Ruth Adams.
I was fortunate to know Sir Edmund Hillary well, and he agreed to write the Foreword for my book, Ebenezer Teichelmann, about another great New Zealand mountaineer. Mick Sullivan I could also count as a friend as in 1991 when I lived at Franz Josef Glacier, Mick and his wife Joyce lived over the hill at Fox Glacier, we organised the Guides Reunion to celebrate the NZ Alpine Club Centennial.
Williamson said his decision to rename the geographic feature was made the greatest respect to the other climbers and their families.

Sir Edmund was an admired and respected climber and mountaineer, not only in New Zealand but in many other parts of the world, he said. 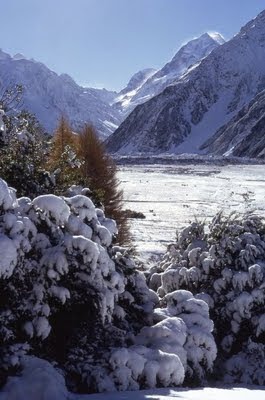 
The Hillary Ridge name will become official on 18 August 2011 when gazetted by the Board.
Left: Aoraki/Mount Cook. Photo: Bob McKerrow
Posted by Bob McKerrow - Wayfarer at 18:28

This is great news and I love it. "The Long White Cloud" is always music in my ears.

Hi Bob. It's interesting that they finally went ahead with this as it was quite a controversial thing, possibly because it was so high profile to begin with.

Kia ora Bob,
This was a pretty hot button for awhile here in NZ. Personally I don't think it is a bad way to honour Sir Ed - after all these climbs in the Cook area are where he honed his craft and opened up the world to himself and NZ climbing. I think a strong case could be made for the same consideration being given to Harry Ayres.
I had a work conference up in Auckland yesterday and the keynote speaker was Graham Henry and it was an awesome 90 minutes. I feel far more confident just quietly that he has the AB's on the right path.
Cheers,
Robb

I am pleased Aotearoa brings music to my ears. I want to hear that music when I climb the Hillary Ridge of Aoraki.

Dear Mike
I can live with the Hillary Ridge on Aoraki. It is interesting to note that Ed was a guided client when he climbed it. I often feel Harry Ayres should get greater acknowledment for what he did for NZ mountaineering.

I am so pleased you feel that graham henry is on the right track. The ABs are looking so good.

You are right about Harry Ayres. It would be fitting to have something significant named to honour him

I think it is OK the south ridge is named after Ed. I didn't see any of the controversy. What were people saying?

Kia ora Bob,
There were various mumblings and grumblings across the board, one group I recall whom did put forth a case that Harry Ayres did deserve consideration for his many years and climbs in the area, and particularly from both local and outside Maori concerns about any lack of consultation. The media gave it a short run, but as with most things the attention span quickly wanes. MikeM wrote a post about it, as did another blogger I am aware of from a Maori point of view, Marty Mars. I shall try to find them for you. My own view, as I wrote earlier, is I do not have a problem with it all. Probably more so with old time guys like Julius Haast who ran around naming peaks and passes after European scientific notables simply to gain favour. I recall Charlie Douglas naming ranges with particular deragatory names as a way of revenge, but was over ruled :) Good ol'Charlie eh!
Cheers,
Robb

What Marty wrote, and what I wrote. There are some links from those posts to the various related news articles.

It doesn't really bother me much at all, but the controversy reminds me a lot about the massive personal wars people have had over whether Pluto's a planet or not. Just semantics.

Thanks MikeM and Marty for your comments on the South ridsge. It has always been the South Ridge since I first saw it close up in 1966. We need to consider that Ruth Adams and Mick sullivan were part of that first ascent party and were quite remarkable people in thgeir own right. Mick spent all his life on the west Coast and guided for 20 years. One bad incident blotted his guide book somewhat, but yet one of the most athletic climbers his era.

So I like the name South ridge, and I can live with the name Hillary Ridge.

Robb. Thanks for your extensive feedback too. It is important these issues are thoroughly debated.

I totally agree with the article.