Last Game At Carisbrook -'The Brook'

Trhe Otago Rugby Union is encouraging the public to get to the ‘Brook’ for a day to remember on Saturday, August 6. involving the rugby community on the day is a key focus for the Otago Rugby Football Union as the curtain is finally drawn on Carisbrook. 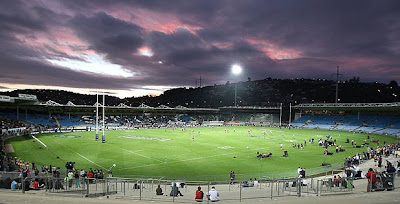 Carisbrook is my ground. I was born on a hill overlooking Carisbrook in Dunedin, and watched the All Blacks play the mighty 1956 Springboks when the late Ron Jarden scored an intercept try for the All Blacks to clinch a 10-6 win in the first test of the tumultuous series of 1956. 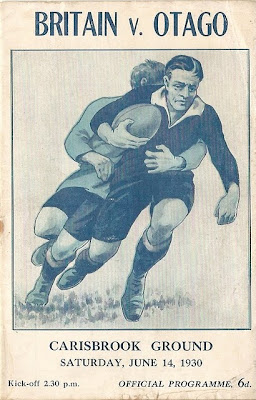 It's just a rugby ground – bricks and mortar surrounding a rectangular piece of grass. Well past its best, too, rickety, rusty and ready to be put out to pasture in favour of a brand spanking new piece of modern technology.

I was there is 1959 when Otago beat the Lions 26-8 and some weeks later saw Don Clarke kick 18 points for a victory over the Lions and the Evening Star headline screamed: Clarke 18, Lions 17.

From Mum and Dad's bedroom window I could see Carisbrook, and if 1 walked 50 metres to Benfell's garage, I could watch a test match from there.

I remember the day in 1960 I played a match for Otago schoolboys against Southland, in front of my grandfather, and felt so proud.

I could run from my house down the hill to Carisbrook in less than 10 minutes. I met most of the visiting test rugby and cricket teams in the late 50s and 60's. Perhaps my fondest memory was in 1959 meeting that great Irish winger, Tony O'Reilly a few days before the first test at Carisbrook.


But there's something about Carisbrook, the iconic international rugby ground situated in working class south Dunedin, that has always evoked a certain charm, a certain aura 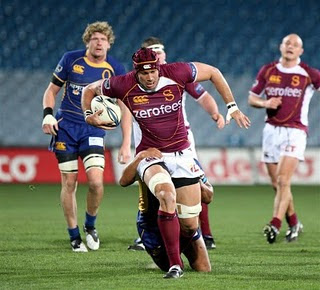 Right: The greatest ocassions of all at Carisbrook have been the Otago-Southland fixtures. Soputhland currently hold the coveted Ranfurly Shield.

The last official first class game at Carisbrook this Saturday 6 August 2011 will see Otago play local rivals Southland in a rare afternoon ITM Cup game, kicking off at 2.35pm. This game will be preceded by the Dunedin premier metropolitan club final and a junior march-past, involving all junior clubs from throughout the Otago region. The day will also link history and future with two additional games on the hallowed turf. An Otago Legends XV will square-off against their Southland counterparts and looking towards the future, the Taieri and Eastern under 13 teams will also contest their final to kick the day off at 10.30am.
‘We are planning a day at Carisbrook that involves and acknowledges the many people, clubs and organisations who have been a part of rugby at this great ground over the years’ commented Otago Rugby General Manager Richard Reid.


‘Aside from the rugby on the day, we are also running two very important events to acknowledge those people who have made contributions both on and off the field. Our Legends of Carisbrook Black-tie Dinner on Friday night before the big day, will acknowledge some of the great Otago past players, while on match-day we are hosting 150 invited guests from around the region in the Team Otago Lounge. Both events will be an opportunity to reminisce, and also allow us to thank those people on behalf of Otago Rugby’ added Reid. 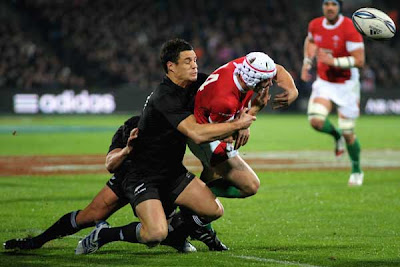 Wales winger Leigh Halfpenny loses the ball as he is tackled by All Blacks first-five Daniel Carter in the last test match at Carisbrook.

The Legends of Carisbrook Black-tie Dinner, which will be held at Forsyth Barr Stadium on Friday 5 August, sold out within a week, and with current pre-match ticket sales already reaching 3,500, it is expected that the weekend will be a big draw card for the local rugby community.
‘The day is significant and we have chosen a suitable piece of entertainment following the final whistle that all those in attendance will relate to and will allow us to close the door in an appropriate way’.

The Otago Legends XV is a side that includes former All Blacks and Otago greats. The two Otago record holders, Richard Knight (170 games) and David Latta (161 games) will be joined by a number of players who have returned to Dunedin for this match.

Both Knight and Latta are looking forward the match, and the opportunity to run out onto Carisbrook was an opportunity not too be missed.

‘I haven’t seen some of the boys for a while, so it will be great to catch-up and tell a few stories about the old days. It many ways it’s about the memories, and the chance to spend a day at the brook in the final hour will be very memorable’ commented Knight.

'It was a great idea to bring the boys together for a run on Carisbrook for the last time. As a player, I spent a lot of time at Carisbrook over my career and it will be fantastic to be a part of the day’ commented Latta.

One unique aspect of the Legends game is that jersey number 22 will be auctioned at the Friday night black-tie dinner, and the lucky auction winner will get 15 minutes on the field with the Otago Legends XV.

Tickets start from $15 for adults and all children are $5. Tickets can be purchased from the Carisbrook ticket office on Burns Street or from all ticket direct outlets or visit www.ticketdirect.co.nz

1949 Otago complete six successful shield defences despite having 11 players in South Africa with the All Blacks.


1998 Otago beat Waikato in NPC final
Peter Bush (79), the doyen of sports photographers in New Zealand, has photographed many tests at Carisbrook, after first starting as a photographer at The New Zealand Herald in 1948. His memories of Carisbrook are all good, from the first test match against South Africa in 1956 to the freezing British Lions test in 1983.

"I remember Mark Irwin, the Otago prop, having to go off in 1956 because he had a broken collarbone or something. Those were the days when there were no replacements so he just stood on the sideline with his parka on. He wasn't retreating from the sideline. Those were great days for Otago rugby," Bush said.
We'll remember Carisbrook particularly for the afternoon tests: the smoke from thousands of cigarettes drifting across the ground, the chants and the roar of the crowd, the heroes whose deeds on the green sward enraptured us in the winter months.

We'll never forget you 'Carisbrook'because, as long as the game is played in New Zealand, Carisbrook will be an integral part of the All Black test story. But I will remember Carisbrook for her diversity for I have seen the Indian Hockey team play here after their victory at the Melbourne Olympics, great athletes such as Murray Halberg, Neville Scott, John Landy and Merv Lincoln run the 'Fesitval Mile', cricket greats such as Bert Sutcliffe, Ken Barrington, David Shepherd, John Reid and Glann Turner, Frank Cameron and Alec Moir play on her hallowed turf, and pipe bands, marching girls and acrobats giving displays.
When the last game of rugby is played on Saturday afternoon as the winter cold bites Carisbrook and supporters and players head off for a Speights, 103 years of history will be locked away in many memories, and least 56 years in my misty mind.
Posted by Bob McKerrow - Wayfarer at 04:09

Kia ora Bob,
That is a real shame, but those memories will live on. I grew up in the shadow of Lambeau Feild in Green Bay Wisconsin, and recall as a kid the wonderful games and walking to the stadium. Those cheers still ring deep within me. My son Charlie played with his Under 9 team at a tournament out in Bulls this past weekend. I was amazed at the number of boys, and girls, out there all day playing 4-5 games, maybe some of them imagining themselves at a place like Carisbrook. New Zealand rugby is in good hands.
Cheers,
Robb

All wonderful things, generally come to an end. But family and history endure. Treasure those moments of takeing Charlie to play in Bulls. How kids love rugby.

For me, Carisbrook shaped my young life and I will treasure thatr memory forever.

This will give you an idea on the reputation of the company.
The lead character of Dumm's strip was a male, whereas Messick's lead character was
female. Among Pakistan newspapers, the best-studied papers are not always those from the nation's capital. I mean there is certainly intelligence behind the construction, so Mother Nature has to take a back seat in this case. Decorated coffins became still more important in the First Intermediate Period (2181 2055 BC), when many tombs contained little mural decoration.

Of course, the dictatorship in Egypt is far different than what the
vast majority of Americans face. The lead character of Dumm's strip was a male, whereas Messick's lead character
was female. Professional newspaper reporter must be acquainted with all aspects of human activities.
They also delight in the creativity provided by the activities.
Decorated coffins became still more important in the First Intermediate
Period (2181 2055 BC), when many tombs contained little mural decoration.

Be sure that the oil doesnt get direct contact to your own hair scalp.
As we know that our bodys natural structure and physique also contains the wax esters
which helps as natural moisturizer on the skin and prevents from multiple environmental problems.

It only leaves a lustrous sheath on the hair and gives it
a beautiful look rather and the greasy effect that is left by the usual
hair oils. This is why many salon stylists always recommend a hot oil treatment for hair.
Low self-esteem, hair fall, itching in scalp and facial skin infections are common side
effects due to dandruff problems.

It had been a while since I visited web site with such high quality information.
Thansk rather a lot for the useful data