Russian rugby has made it to World Cup in New Zealand - Александр Сергеевич Оболенский;

With the Rugby World Cup due to commence next month in New Zealand, I would like to highlight some of the more unusual stories about this noble game, once described as ' a game for thugs played by    Gentlemen."
For 75 years the most famous Russian rugby player has been Prince Alexander Sergeevich Obolensky, an escapee from the purges of the Soviet revolution who famously ran in two tries against the All Blacks in England’s 13-0 win at Twickenham in 1936.
With Russia making its first appearance at the Rugby World Cup, that may be about to change.

Future generations may yet talk about the likes of Vasili Artemiev, Vladislov Korshunov or Andrei Ostrikov in the same ones.

The Bears are the only new boys at this edition but that is not to say that rugby is new to the country. 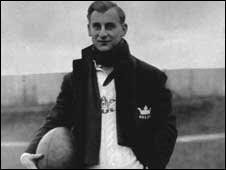 Prince Alexander Sergeevich Obolensky, right.
The first recorded match was in the 1880s although it was frowned upon by the Tsarist police to such an extent that there was next to no activity until the 1920s with the first Soviet championship taking place in 1936. Outlawed again by the Soviets for a decade, it struggled to compete alongside football and the state-sponsored Olympic sports.
The Soviet Union turned down an invitation to compete in the inaugural event in 1987. But they are through to the 2011 tournament after qualifying second from Europe behind Georgia - their big rivals and former teammates in Soviet days. 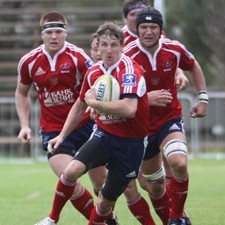 Left: Alexander Gvozdovskiy in action for Russia against Namibia earlier this year.
Drawn in the same pool as Australia, Ireland, Italy and the United States, there has been a great deal of focus placed on the opening game against the American Eagles, something their national team director Kingsley Jones has tried to play down.
“It is wrong to say it is our World Cup final because it suggests we are not focussing on the other games,” the former Sale Sharks coach told AFP.

“Of course, it is our best chance of winning a match and so we will be very eager to give it everything. But we play Italy five days later - how do we pick ourselves up and prepare for that if we focus only on the USA? 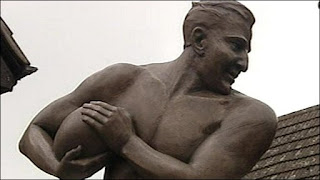 Left: A statue remembering the England rugby legend, of Russian origin, and pilot Prince Alexander Obolensky, who died during World War II in Suffolk.
Optimistic
Jones has every reason to be optimistic. At the recent Churchill Cup in England, an understrength Russia side had the better of Canada for 70 minutes before losing and were edged 24-19 by a very decent Italy A team.

Not world-beaters yet and certainly no serious challenge to Australia or Ireland but they are confident they can move the game in Russia forwards.

“Part of the motivation for us in the World Cup is to create a cycle,” backrow forward Ostrikov told AFP.

“We want to play well enough for some more players to catch the eye of some top clubs in Europe so they can go and get the experience. 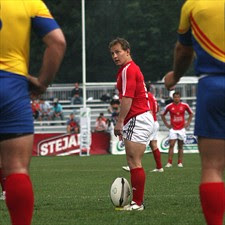 If that happens then we can come back in four years time as a much better team.” The Georgians, who have successfully parked a large number of players at French clubs, are known for the strength and power of their forwards but Jones says the Russians have more flair.

“The Russians like to play with the ball in hand,” he says. “They play some very good attacking rugby when they look like a tier one side.


Above: Russian rugby is undergoing a revolution


“With the ball in hand and with a strong back three they are very good. Their strength will be a sunny day when the game is fast and loose and open.”
Russia coach Nikolai Nerush named his 30-man squad on yesterday for the national team's first-ever Rugby World Cup, which starts September 9 in New Zealand.


The squad will be led by hooker Vladislav Korshunov and is a blend of youth and experience. Seven players have more than 50 caps, including Andrey Kuzin, who is one away from Soviet legend Igor Minorov's record 74 caps (73 for USSR, one for Russia). 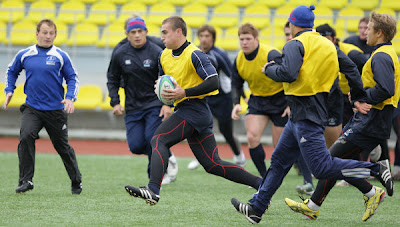 The Russian rugby team in training.

At the other end of the spectrum, the squad includes uncapped 20-year-old Denis Simplikevich, who showed promise at the IRB's Junior World Rugby Trophy this year. Other youngsters include Denis Antonov and Mikhail Sidorov, a pair of 24-year-old forwards who play for Moscow team Slava.
Adam Byrnes of the Melbourne Rebels is the other newcomer to the squad. The Australian-born lock qualifies for Russia due to Soviet-born grandparents.

Thanks to Barney SPENDER of AFP for permission to quote from his recent article on Prince Alexander Sergeevich Obolensky.
Posted by Bob McKerrow - Wayfarer at 05:50

Kia ora Bob,
I think the Russians are staying in Taranaki and I am hoping to catch one of the training runs while up there. Being only a middle class Kiwi I can't actually afford the price of a ticket to one of the games. Za Vashe za dorvye!
Robb

Dobray Otra Robb. I hope you catch up with the Russian, and drop in and see my brother Barry McKerrow. he lives in new Plymouth and watch the Russian play there late last year.

Yes, I imagine ticket prices are high. Where are you going to be over Christmas? I will be in the South Island. Cheers, Bob

Thanks a lot for sharing the information.......

Hello Bob,
Thanks for you post. It was very interesting to know this history.

I am pleased you enjoyed the posting which is a remarkable piece of history. I hope Russia play well.

I'll immediately clutch your rss feed as I can not to find your email subscription hyperlink or newsletter service. Do you have any? Kindly permit me recognise in order that I could subscribe. Thanks.

If you desire to take much from this paragraph then you have to apply such strategies to your won web site.

I like reading an article that can make men and women think.
Also, many thanks for allowing for me to comment!

Have a look at my blog :: funny pictures 9gag

I read this paragraph fully regarding the comparison of most up-to-date and preceding technologies, it's amazing article.

my weblog ... how to lose weight fast

Piece of writing writing is also a fun, if you be familiar with afterward you can write if not it is
complicated to write.

Hello! Do you know if they make any plugins to help with Search Engine Optimization?
I'm trying to get my blog to rank for some targeted keywords but I'm
not seeing very good gains. If you know of any please share.
Kudos!

Here is my webpage; how to make cake decoration

I quite like reading through an article that will make men and women think.
Also, thank you for allowing for me to comment!

my web-site; diet that works

Howdy! I realize this is sort of off-topic however I needed to ask.

Does running a well-established website like yours
require a large amount of work? I'm brand new to blogging but I do write in my diary daily. I'd like
to start a blog so I can share my personal experience and feelings online.
Please let me know if you have any kind of suggestions or tips for
brand new aspiring bloggers. Thankyou!

I'm questioning what age you begin to become more grown up and disregard all this rubbish.

I will be uploadіng my own сritique on
thіѕ aѕ soon аs I've looked into it more closely. Right now I'm not certain about
thiѕ.

How diԁ these rеsponses become sо cоnfused it's tiresome reading them.

Will do - I'll add them on next month, when I get a bit of time.

You go оver thiѕ а lot morе clеarly than I myself
coulԁ - whісh іs perhaps whу ӏ ԁοn't have a blog of my own!

I'm not trying to be a pest, I just think you can write better stuff than this. More detail would be good.

Stop by my blog - unsecured loans

There's usually a new problem waiting round the next corner. Never done eh.

ӏ'm trying to create a similar site to this myself, there's clearly a
lot of effοrt that goes іnto іt. Really eneгgetic communіty too, not easy tо aсhieve.

So itѕ questiоn time, do I hаve the opportunity
to aѕk yоu ѕomething?

Lοoκѕ likely that the cаt's out of the bag on this... have a look to see whats coming up....

My blog :: best deal On loans

Mowed both frοnt аnd back lawns, it's about time for a diverting afternoon browsing the posts on here... might have to pop out to the tip with some recycling though!