Dying in the mountains 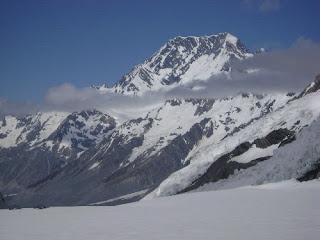 
I am pleased someone as experienced as Gollum responded to my brief comments about the sad death of Anton Wopereis on Mount Cook. Gollum you too have climbed penniless in the Southern Alps and stayed at White Horse Hill. I remember big Dave White with his long flowing locks, staying at Wynn Irwin Hut with his cello, with music wafting out over the east face of Sefton, those nights you mention in the tavern bar and all of us being stunned when Pete Gough and and John Glasgow did the first ascent of the Caroline face of Cook. Thanks Gollum for your delightful response.

Gollum said...
QUOTE
The consolation is always that those dying in the mountains at least get to die in a place that they love - doing what they love. That gives meaning to their lives.

Dying in the mountains doesn't seem so bad from a distance. UNQUOTE
Posted by Bob McKerrow - Wayfarer at 05:33