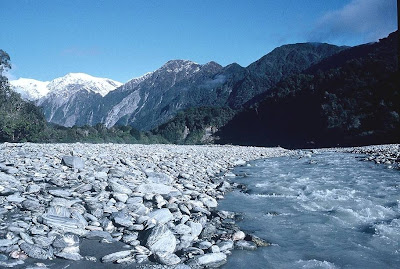 It’s a while since I’ve been in touch – about 15 years to be exact – but I discovered your blog a few months ago and your recent posts about feeling homesick for NZ, plus a reference to Alec Millar, prompted me to finally contact you.

In your post about Alec you said that during 2008 you wanted to talk about some of the people who had inspired you over the years. I felt that it was high time I paid you a similar compliment.

Back in June 1991, when you were in charge of the National Park at Franz Josef Glacier, I came over as a student from London to spend a few weeks doing some surveys on the landforms east of the glacier. You kindly provided me and a couple of friends with use of a DoC house, and my first night in Franz has stuck in my memory a long while. You picked us up and drove up to the glacier that night, swerving both to run over possums and as you kept trying to retune into the Bledisloe cup match. It was a frozen, clear night in the valley, thick with that incredible rime frost the valley seems to generate, and the Southern Cross was hanging right above the icefalls. You told us the Maori tale of the Goddess’ tears which froze to from the glacier, and then back to yours for rough cuts of lamb and the drawing of maps on your kitchen table with red wine, much relating to Okarito or the Callery. Alec was likewise generous and flew us that Sunday afternoon around the peaks of the Divide

You may not recall any of this (!), and why should you? You are very unlikely to recall a follow up trip I did four years later specifically to climb into the Callery Valley. Following the 1991 visit to Franz it is pretty fair to say that I became obsessed with all things Callery, West Coast gold developments, history of Okarito and Hokitika. I didn’t get into the valley – the photo attached shows the result of the aborted efforts in the winter snows of ’95 – but I wrote a (poor) screenplay based on the West Coast over the subsequent years and, until age 30 when I taught geography, indoctrinated endless students in the magic of the West Coast.

A big picture of the glacier that I brought back in ’91 stills sits in my office, along with some twisted schist from the valley floor that seems to describe everything that it is extreme and remarkable about the place. In retrospect it all seems a bit over the top but there was something about the history, the folklore, and the characters over the years – including yourself – that made it a tremendously powerful thing to steep oneself in. I now find that you can go on to Google Earth and zoom so deeply into the Callery that many of the old features described by Leonard and Lowe, and from Teichelman’s trip, are visible. If I’d seen what it looked like back in ’95 I would probably have saved the airfare! The ‘obsession’ with researching the history of it all over the years, though, has been great fun and very worthwhile.

I noticed in one of your web blogs a reference to some family connection in Scotland, in the pub trade. Maybe not serving Monteith’s but a healthy connection nonetheless! It prompted me to think that if you are in the UK in the future at any point I should like to take you to a good red meat restaurant in London to thank you for all that original inspiration you gave me, plus I’m a Fellow of the Royal Geographical Society and they have major mountain archives if you fancy getting access to them in case they may be of use to your book research etc.

I have my eye on the RWC in NZ in 2011 as a marker by which time I really ought to return for another trip – can’t believe it’s been 13 years, but I guess that’s what job / family / self-employment does to your sense of timing. However, whenever I think back to my time on the West Coast I turn to some of the old photos. You lent me your car once to drive down the track to Okarito, from where I climbed the trig and took this shot (see attachments 2 & 3), and there’s another of the Waiho for you too.

I hope they bring a smile to your face too, and it helps you along in Jakarta where I remain tremendously impressed by the commitment that you give.