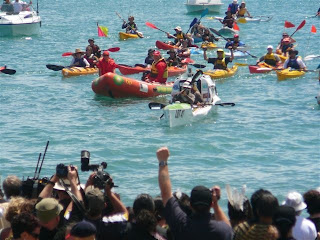 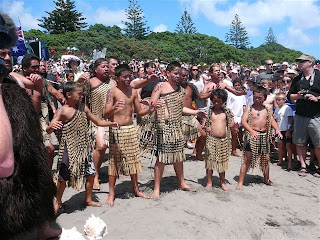 My sister in law Barbara McKerrow was at the landing in New Plymouth for the two Trans Tasman kayakers. Here is her story and above, two of her photographs. The first is James and Justin arriving, and below a Maori welcoming party. Thanks Barb.

I have just returned from a great event at New Plymouth's Ngamotu Beach
where the intrepid cross-Tasman kayakers arrived just after midday. I was
part of the welcoming party with our Mayor and it was bedlam down on the
beach. The boys were in high spirits and seemed in good shape after such an
ordeal. They could walk (just) and I stood next the mother of one of them
(James)who wept to see her son arrive to such a fantastic Taranaki/New Zealand welcome. The Mayor said the estimated crowd up and down the coast out to greet them was 45,000. Attached are 3 of the better photos I managed to get - the arrival, the kapa haka group and the 2 men speaking to the media. They were overwhelmed. I hope this is useful to you.

Hi there, I enjoy reading all of your post. I wanted to write
a little comment to support you.

An outstanding share! I've just forwarded this onto a colleague who had been conducting a little research on this. And he in fact bought me lunch due to the fact that I stumbled upon it for him... lol. So allow me to reword this.... Thank YOU for the meal!! But yeah, thanks for spending some time to discuss this subject here on your internet site.