Speights beer for Justin and James 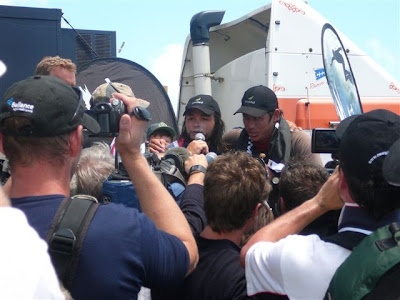 This picture was taken by my beautiful and highly intelligent sister-in-law, Barbara mcKerrow

i would like to congratulate you and your team for managing one, if not the greatest, adventures in the world. For 60 days I was riveted. I checked the website at least once a day. Wrote quite a few stories for my blog too. I attempted it in 1989 with Paul Caffyn and we were basically arrested by the Tasmanian Police.

Hard on the heels of Andrew McAuley's tragic crossing, it was so good that two real gutsy guys have finally "knocked the barstard off". as Sir Ed would say. Now we can get on to other challenges, humanitarian and otherwise.

The tracking map was great and the website superb. Well done guys.

I have my brother and his wife living in New Plymouth so I was able to get first hand accounts. The latest was a few minutes ago. You'll love this:

"It was good to see that the first beer the kayakers had was SPEIGHTS it was
on the TV one new tonight ,

Go SPEIGHTS , they must be good blokes ."

All the best guys, and thanks Tom.