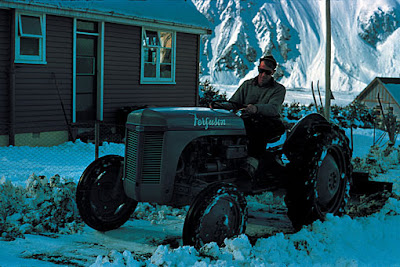 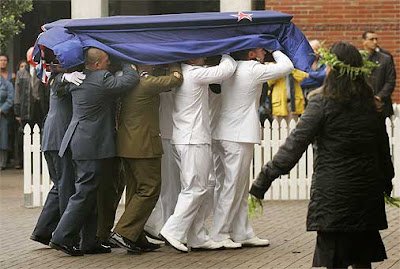 Ed is no more driving tractors. Today his casket arrived at 10am in Auckland to a brief and moving ceremony. It began with Armed Forces pallbearer team which marched in to a slow drum beat.

Representatives of Ngati Whatua, the local Maori tribe, issued a karanga as the body was slowly carried across the windswept Cathedral Forecourt.

Watching on was Governor General Anand Satyanand, Prime Minister Helen Clark, Opposition Leader John Key and other politicians. Also there were representatives of the Nepalese community.

Lady June Hillary and family waited inside the Cathedral.

Once the New Zealand flag-draped casket was put in place, the Governor General led in the laying of wreaths.

Representatives of the Indian community placed flower garlands around a framed painting of a young Sir Edmund that sits beside the coffin.

Indian women wore sky blue saris to symbolise "the top of the world".

The ceremony was conducted in silence.

When it was finished all but Sir Edmund's family left for a period alone with the casket.

We all remember Ed in different ways. I met him for the first time in 1975 in Kathmandu, shortly after the tragic death of his wife and daughter. I met him a number of times after that. He was always direct, humble and strong in his opinions. He was generous of his time and spirit. I remember him agreeing to be patron of our 1986 North Pole expedition and again in 2003, agreeing to write a Foreword to my book on Ebenezet Teichelmann. A truly generous man.

The last time I met him was on a street corner in Delhi on a sweltering May day, 44 oC, in 2003. There he was in a suit and tie to inaugurate Tenzing Norgay Marg (street) and Sir Edmund Hillary Marg as part of the 50th celebrations of the first ascent of Everest. The New Zealand High Commission is aptly situated in Sir Edmund Hillary Marg. I was so inspired to see Ed that afternoon, that I wrote a poem that night.

Tomorrow Chris Kinder told me there is a service for Sir Ed in Dublin, and he wants to read the poem I wrote about Sir Ed.

Last week we had a small wake for Ed in the Everest Bar in Jakarta, a couple of Kiwis and nepalis attended.

Ed and Fergusson tractors will be my lasting memor
Posted by Bob McKerrow - Wayfarer at 04:51

Aye. A mountain of a man that made a bold mark on history. And you knew him personally!