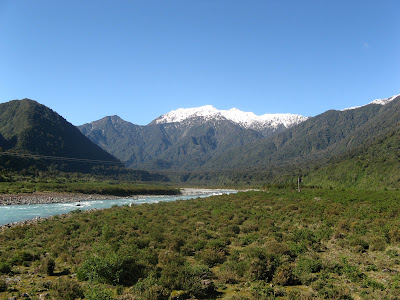 Caption: The Whataroa River and the Southern Alps

I lived on New Zealand's beautiful West Coast of the South Island for almost ten years and over a forty year period climbed many of the high peaks in the Southern Alps. It is my Turanawaewae, "my place to be humble yet stand tall.". It's beauty is unsurpassed anywhere in the world and I was delighted to see this article about a committed group of New Zealanders protesting about the extraction of coal and its terrible effects on global warming. In a country with so much clean hydro electric power, why do we need to ruin the world's environment by mining and using coal ?
I wish I was there to march with them.

The environmental group which has occupied a proposed coal mine site on the West Coast of the South Island of New Zealand is planning a three-month march to raise awareness about climate change.

The Save Happy Valley Coalition plans to march from Auckland's Sky Tower to Happy Valley, on the West Coast, beginning January 28.

The marchers chose that date to begin the walk as it marks the second anniversary of the date the coalition began occupying Happy Valley.

A statement from the coalition said a peaceful protest would be held outside Prime Minister Helen Clark's electorate office at 1pm today.

A fundraising event will be held in Auckland on January 26, two days before the walk begins. They hope to complete the march in April.
Posted by Bob McKerrow - Wayfarer at 18:37