Freedom to do what you like in Mt. Cook National Park, but who pays when things go wrong ? 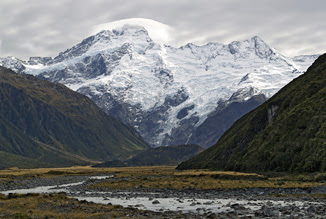 There was an intresting article posted by NZPA today about a young Italian climber who had his hand partially amputated by a falling rock in Mt Cook National Park today had ignored advice not to climb in The Footstool area. This raises an issue that dates back to the early 70's when I worked for a few years as part of a professional mountain rescue team at Mt. Cook. Frequently we would give strong advice, or warnings, to climbers not to climb in a particular area, but they would ignore the advice and go out and climb a route. Once I gave advice to a young New Zealand climber who told me he was going to climb Mt. Wakefield. He had a lethal home-made ice axe which I told him was dangerous. 15 hours later we carried his body off the mountain after he fell and speared himself with the ice axe. Should the New Zealand taxpayer have to pay for rescues where climbers go against the advice of experienced National Park staff ?

Don Bogie one of New Zealand's most experienced mountain rescue experts said yesterday "people could go where they wanted in the national park, but our advice to them is that a lot of routes traditionally on at this time of year have got less snow on them than usual".

"The routes with more stable rock are the ones to do."

The 23-year-old was flown to Timaru Hospital this morning after his two companions alerted emergency services by cellphone about 8.45am.

Instead, it appeared the injured climber was belaying his companions on the east face of The Footstool when a falling rock crushed his hand.

The DOC Aoraki/Mt Cook alpine rescue team co-ordinated the rescue using a helicopter with a strop to recover him, then returned for his companions.

"The previous day, two of our mountaineering staff had advised them not to try that climb because it's in poor condition."

It appeared the Italians ignored the advice.

Mr Bogie said the climb the party was attempting was "only really on" when it was well covered in snow and ice.

"At the moment it's mainly bare rock and poor-quality rock."

Mr Bogie said the Mt Cook area was experiencing a "very dry summer" and a lot more rock was exposed than usual at this time of year.

"Most people are making good decisions and going to where the rock is sound," he said. "These guys didn't."

It is my strong belief that mountaineers who go against the advice of professional national park staff and later require rescuing, should be charged fully for the rescue. Who was it that said "liberty is the right to discipline ourselves before being disciplined by others."