Some of the largest aftershocks since yesterday morning's 7.1 earthquake are reportedly being felt in Christchurch. 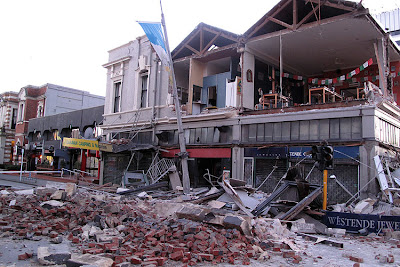 This morning I communicated with Peter Cameron, Regional Director of Civil Defence for New Zealand's South Island. Peter and I worked together after the Tsunami in Indonesia and we keep in regular contact. Peter said "We are getting many aftershocks and we are moving from the chaos stage in the right direction."

Peter and I have been through a number od disasters togethert including the large recovery operation in Yogyakarta, Indonesia that killed over 5,000 people. Often we speak of the chaos stage and it takes 24 to 48 hours fopr emergencty leaders to achieve control. This seems to be happening in Christchurch with strong and decisive leaderships at all levels of Government, civil defence and community.

Staff at the Christchurch civil defence emergency centre said one jolt at just after 1pm felt a lot bigger than recent shocks.

"We had one just now, in the last two minutes, and one ten minutes ago that definitely felt very big. It was very shaky," a spokesperson said.
GeoNet's last reported quake, at 1.04pm, measured 5.0 on the Richter scale and hit 20km north-east of Leeston.

The biggest aftershock since the 7.1 quake measured 5.1, at 5.20am this morning, 10km south of Darfield. 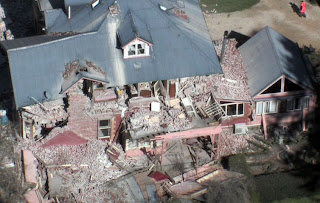 I have been  communicating with my two daughters who live in Christchurch and report of widespread destruction and debris everywhere. Ruia writes, " We are getting many aftershocks, but we are lucky we have water and power." Ruia lives in my house and reports only minor damage and my wine glasses having broken. She came off lighly compared to others. See photo above of severely damaged house.

My other daughter Aroha,She says, "our country is blessed and its a miracle it didn't happen during the day and no one was killed."

He said teams of structural engineers were in place, scouring buildings for damage, focussing on those which were critical to the functioning of the CBD.

''It could be weeks [as in] some cases overseas. Until a building has been rendered safe by demolition, in some cases. You just have to keep people away because its too risky.

''The number of buildings that have been damaged is quite high. It's a big task.''

Officials will know later today which schools can be opened.

''Schools are a problem. We don't want to put children into risky buildings. You can't have schools operating if there is no fresh water or sewerage. There is a process in place for checking schools.''

Although two local civil defence centres closed because they weren't needed, he expected demand to increase tonight because of bad weather.

Resources, such as tarpaulins, to make buildings weathertight could be deployed by air, but there was no demand for them at yet, he said.

New Zealand had turned down offers of support from the US military, based in Hawaii, and the UN he said. This was met with surprise, he said.

The army and Burnham and some additional troops in Linton are available to help police but so far weren't required, he said.

Ninety per cent of the city has power, he said, but there are issues in the rural areas with power and drinking water.
Posted by Bob McKerrow - Wayfarer at 18:57

Thanks for the updated news on the earthquake in ChristChurch.

"New Zealand had turned down offers of support from... This was met with surprise,..."

I read the above with a smile. Don't they know that NZ is wellknown for using brain and brawn in disaster management with great success. Finger pointing is placed at the bottom of their scale. I rest my case.

Good morning from a sunny Sri Lanka. Thanks for your astute comments and it is clear you know the NZ psyche very well.

I believe the people of Christchurch have shown something we can all learn from in disasters situations.

My sis informed me about your web site and how nice it is.

She’s right, I am really impressed with the writing and slick design.
It appears to me you’re just scratching the floor by way of what you can accomplish, but you’re off to
a terrific begin!

Also visit my blog ... having trouble getting pregnant the third time