It's a political memoir with celebrity trappings - secrecy, security, a multimillion-dollar deal and, crucially, controversy. 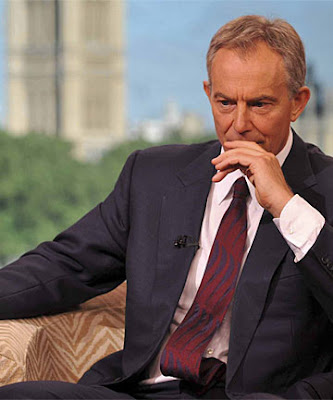 Being a wayfarer and a journeyman, I feel somewhat qualified to comment on Tony as a fellow journeyman.


When Tony first came to power, I felt here was a man, of Jimmy Carter potential, who could change the world through his empathetic heart and shrewd understanding of parliament and politics. He almost did it, but unlike Margaret Thatcher, he backed the wrong war, and the wrong President of the USA. Did the average Britain give a toss about Iraq ?  Not really, but the Falklands pulled some patriotic strings.

I loved his accurate comment about his rival and successor Gordon Brown who he found difficult and maddening. I would add that Brown 'is like Friday's fresh and hot pie, served up cold and stale on Monday.'

Tony Blair's "A Journey" was stirring political passions even before it hits bookstores Wednesday (local time), with excerpts revealing that the former British prime minister has cried for soldiers and civilians killed in Iraq, but still thinks it was right to invade and topple Saddam Hussein.

The decision to go to war remains Blair's most divisive legacy. In excerpts from the book released by the publisher late Tuesday, Blair says "I ... regret with every fibre of my being the loss of those who died."

"Tears, though there have been many, do not encompass it," he says.

But, he says, "on the basis of what we do know now, I still believe that leaving Saddam in power was a bigger risk to our security than removing him and that, terrible though the aftermath was, the reality of Saddam and his sons in charge of Iraq would at least arguably be much worse."

"I can't regret the decision to go to war," he says.

British booksellers are reporting heavy interest in the book, for which Blair was paid an estimated 4.6 million pounds ($7.5 million). He's donating the proceeds to a charity for injured troops.

Billed by publisher Random House as a "frank, open" account of life at the top, "A Journey" is being published in a dozen countries, alongside an e-book and an audio version read by Blair himself. It's in the top 10 on Amazon's British best-seller list - though it's only 4,000 on the retailer's US site.

"Initial sales will be huge," said Jonathan Ruppin of Foyles book store chain. "But whether those sales are sustained will depend on how frank and open it is."

Blair - who is scheduled to be in Washington on publication day, attending Israeli-Palestinian peace talks in his role as an international Mideast envoy - has said he "set out to write a book which describes the human as much as the political dimensions of life as prime minister."

"A Journey" promises to give readers behind-the-curtain insights into major world events from the death of Princess Diana to the Sept. 11 attacks and the invasion of Iraq.

It is unlikely to resolve the conflicting views and emotions Blair evokes.

For many Americans, he remains a well-regarded ally who stood shoulder-to-shoulder with the US in the fight against international terrorism. He's scheduled to receive the 2010 Liberty Medal from former President Bill Clinton in Philadelphia on Sept. 13.

But the question I ask, did he do more than Clinton when in office ?


Definition of a journeyman:


1. One who has fully served an apprenticeship in a trade or craft and is a qualified worker in another's employ.

This was not a win. It was a landslide. After about two hours for a time I actually became worried. The moving line at the bottom of the TV screen was showing over a hundred Labour seats. The Tories had just six. I began to think I had done something unconstitutional.

On 2 May 1997, I walked into Downing Street as PM for the first time. I had never held office, not even as the most junior of junior ministers. It was my first and only job in government.
Tony Blair: ''The relationship with Gordon was very, very difficult''

Was he difficult, at times maddening? Yes. But he was also strong, capable and brilliant, and those were qualities for which I never lost respect.

I'm afraid I stopped taking his calls. Poor Jon [an adviser] would come in and say: "The chancellor really wants to speak to you." I would say: "I am really busy, Jon." And he would say: "He is really demanding it." Then I would say: 'I'll call him soon." And Jon would say: "Do you really mean that, prime minister?" And I would say: "No, Jon."

The curse of Gordon was to make these people co-conspirators, not free-range thinkers. He and Ed Balls and others were like I had been back in the 1980s, until slowly the scales fell from my eyes and I realised it was more like a cult than a kirk.

At that moment, I felt eerily calm despite being naturally horrified at the devastation, and aware this was not an ordinary event but a world-changing one. It was not America alone who was the target, but all of us who shared the same values. We had to stand together.

I had come to like and admire George. I was asked recently which of the political leaders I had met had the most integrity. I listed George near the top. Some people were aghast... thinking I was joking. He had genuine integrity and as much political courage as any leader I ever met. He was, in a bizarre sense... a true idealist.

Tony Blair on Iraq: ''I can't regret the decision''

I am unable to satisfy the desire even of some of my supporters, who would like me to say: it was a mistake but one made in good faith. Friends opposed to the war think I'm being obstinate; others, less friendly, think I'm delusional. To both I may say: keep an open mind.

Do they really suppose I don't care, don't feel, don't regret with every fibre of my being the loss of those who died? To be indifferent to that would be inhuman, emotionally warped.

I will never know precisely what made Dr David Kelly take his own life. Who can ever know the reason behind these things? It was so sad, unnecessary and terrible.

DEATH OF DIANA, PRINCESS OF WALES

Through it all, we were trying to work out how it should be managed. I know this sounds callous. I was genuinely in grief. I liked her and I felt desperately sorry for her two boys, but I also knew that this was going to be a major national, in fact global event like no other. How Britain emerged was important for the country internally and externally. I was prime minister; I had to work out how it would work out. I had to articulate what would be a tidal wave of grief and loss, in a way that was dignified but also expressed the emotion and love - not too strong a word - people felt for her.

Once, near the end, he asked me whether I thought God wanted him to make the deal that would seal the peace process. I wanted to say yes, but I hesitated; though I was sure God would want peace, God is not a negotiator.

DEATH OF LABOUR LEADER JOHN SMITH IN 1994
Of course I had no knowledge that John would die prematurely. Except that, in a strange way, I began thinking he might. I don't mean I had a premonition or anything like that, but if you had asked me, in some private contest with Providence to stake my life on whether he would or not, I would have hesitated. I kept dismissing the thought. It kept intruding.

She was a rock to me, strong when I was weak, determined when I was tempted to falter, and fierce in her defence of the family.

By the standards of days gone by I was not even remotely a toper, and I couldn't do lunchtime drinking except on Christmas Day, but if you took the thing everyone always lies about - units per week - I was definitely at the outer limit. Stiff whisky or G&T before dinner, couple of glasses of wine or even half a bottle with it. So not excessively excessive. I had a limit. But I was aware that it had become a prop.

If I did seem to be enjoying it, then it was a supreme instance of acting. I hated it.

I profoundly disagree with important parts of the statist, so-called Keynesian response to the economic crisis; I believe we should be projecting strength and determination abroad, not weakness or uncertainty.

David Cameron was clever and people-friendly but he had not gone through the arduous but ultimately highly educative apprenticeship I had gone through in the 1980s and early 90s.

I've had some harsh things to say about Ed Balls - I thought he behaved badly at points, and was wrong on policy - but I also thought he was really able, and a talent that any political party should be grateful to have.

If I'd proposed solving the pension problem by compulsory euthanasia for every fifth pensioner I'd have got less trouble for it.
Posted by Bob McKerrow - Wayfarer at 06:58

Do you folks have a fb fan page? I looked for one on twitter but couldn't uncover one, I would like to change into a fan!

Feel free to visit my page: I'm Having trouble getting pregnant