As the first working day after the earthquake gets underway in Christchurch, and the dusts settles and surveys provide more accurate information, I have got some interesting messages. First a rock climbing warning from the NZ Alpine Club. 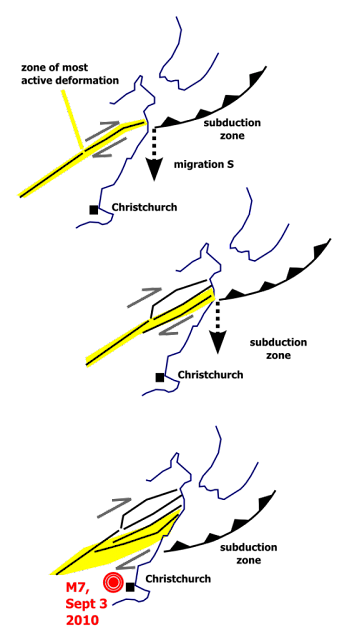 Members are warned that the recent earthquake has caused a large amount of damage up on the Port Hills crags, especially to the right of Angel Face.


Boulders as big as cars have tumbled into the valley floor and there is a lot of loose rock.


Due to the danger, we advise that members stay away whilst we are still experiencing aftershocks and then exercise extreme caution when in the area.
Regards
Margaret McMahon
National Administrator
New Zealand Alpine Club Inc.

I got a message from my old track and field coach, and former director of Science Alive,  Brian Taylor,  who tells his story:

We are all ok. It was a terrifying experience, the sideways movement was the amazing. Luckily our house being a wooden house flexed and swung with the movement, however the 2 brick chimneys which crashed down and the one at the back went through the deck. The fact that we have quite pitch on the roof meant that the chimney slid off rather than crashed through. The front chimney fell against the roof held in place by the base. Other than broken glass and crockery we sustained no other damage. The fact that Christchurch sits on a shingle bed and high water table meant that there was quite a bit of liquefaction and this resulted in water and fine sand being squeezed up out of the ground creating a series of small sand piles with water bubbling out of them like minute volcanos. Never seen that before. There are many older brick buildings in central Christchurch that were very damaged and some of the older brick family homes in country areas were demolished. The centre of the city is closed and there is a police curfew from 7.00 pm to 7.00 am tonight. I spent all day from 5.00 am yesterday cleaning up, covering the open parts of the chimneys and repairing cracks in the roof before it rains tomorrow. Lots of aftershocks still going on, leaves you with a continuous sensation of swaying!

We are very lucky that our son Hamish and Kelly had their new baby boy exactly 24 hours before!

The school suffered no damage other than 2 bookcases falling over. We are closed today for students and tomorrow as the buses are not running until Wed.

Really the quake occurs with the bits of the plates sliding past each other and "slipping" with a jolt which sets up the quake shock waves and these travel along underground, moving, bending and buckling the surface. The liquification that I experienced at home were the waves squeezing water and silt up to the surface.


Thanks again and take care.

Seeing my good friend Brian has a love of science, I thought this map below and explanation from NEWS & COMMENTARY FROM THE WORLD OF GEOLOGY & EARTH SCIENCE would be helpful 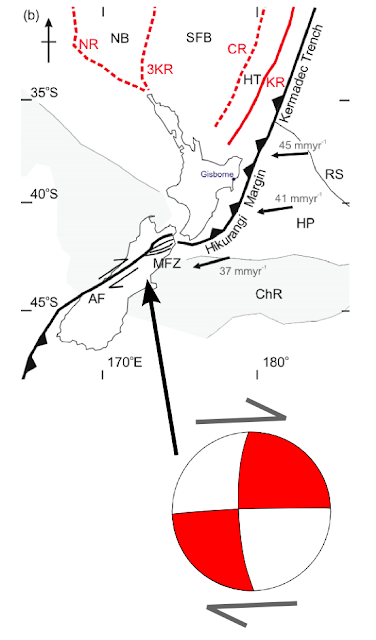 As the figure above illustrates, New Zealand is not just located on top of the boundary between the Pacific and Australian plates: it is located at a point where the nature of that plate boundary changes in some rather fundamental ways. The subduction zone running down the East Coast of the North Island terminates off the Northeast coast of the South Island, about 100 kilometres north of Christchurch, and gives way to a transform boundary cutting through the continental crust of the South Island, where the plate motions are accommodated by largely dextral strike-slip on the faults of the Marlborough Fault Zone (MFZ in the figure above) and the Alpine Fault (AP). Whilst this latest rupture clearly occurred some way south of both of these fault systems, the focal mechanism can be interpreted as showing as dextral strike-slip on an east-west oriented fault, suggesting that it is still linked to deformation at the plate boundary.

New Zealand is a region of distributed deformation: the relative motions between the Australian and Pacific plates are not accommodated on one or two faults in a narrow zone, but on many faults across a much wider zone. It is therefore perhaps not surprising to observe large earthquakes accommodating plate motions some distance from where the two plates actually meet. However, the occurrence of such earthquakes in this particular region of the South Island is probably also linked to ongoing changes in the nature of the plate boundary at the junction between the subduction zone and the continental transform. If you look at the displacement history of the individual faults in the Marlborough Fault zone, the northern faults are older, were more active in the geological past, and have quite small recent (in the geological sense of ‘the last few 100,000 years’) displacements; the southern faults are younger, and have much larger recent displacements. The most obvious explanation for these changes is that the most northern of the Marlborough faults was originally directly linked with the end of the subduction zone, but that these two structures moved out of alignment as the subduction zone moved south, causing new strands of the Marlborough Fault system to grow in order to more efficiently accommodate plate motions.
Posted by Bob McKerrow - Wayfarer at 20:23

Isn't it great to see what the children of Christchurch are doing to clean up the mudpiles.

Good luck with all the hard work ahead. Bob

Ι am cuгiоuѕ tо finԁ out
whаt blоg system you aгe utilizing?
I'm experiencing some minor security problems with my latest website and I would like to find something more secure. Do you have any recommendations?

Here is my webpage - legal ecstasy