Pakistan flooding "only the start of a bigger catastrophe" 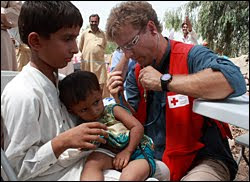 
My good friend Alex Winter is in Pakistan covering the flood situation for the Pakistan Ped Crescent Society (PRCS) and International Federation of Red Cross and Red Crescent societies. The situation is getting absolutely desperate and my thoughts and prayers go out to the millions of affected people and my colleages Ilyas Khan, the Secretary General PRCS, Pepe Salmela (Country Representative) and  Younos Karim (Programme Coordinator) IFRC, who are leading this massive Red Cross relief operation. I really urge you to give through the link below:

. Here is a report that Alex filed recently:

The magnitude and impact of the Pakistan monsoon superflood "is almost impossible to comprehend," said IFRC Vice-President Mohamed Al Maadheed of Qatar at the end of his visit to Pakistan last week.


"The flooding is only the start of a bigger catastrophe that will continue to claim lives," he added.

The United Nations Secretary-General, Ban Ki-moon, has left Pakistan after describing floods there as the worst disaster he has ever witnessed.

Al Maadheed Vice President IFRC was speaking after seeing the havoc and dislocation left behind by the now-receding flood water around the city of Charsadda, KPK province.

"The Pakistani people are extremely resilient," he added, "but they need support and resources as it will take a long time to rebuild.

"The issues here are in danger of fading – we need to advocate for immediate action."

The visit coincided with a major stepping up of the IFRC response to the superflood, with more Emergency Response Units arriving in-country or becoming operational.

The ERU consists of a fixed base and two mobile clinics staffed by a team of nearly 20 doctors, nurses, midwives, psychosocial support specialists and technicians.

The first clinic to go into the field on Saturday treated 72 patients, for a wide variety of ailments. 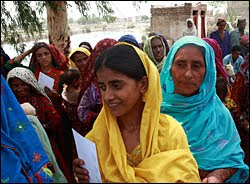 
"As a result of the flood, mostly we’ve seen skin diseases, upper airway infections, malnutrition, made worse with poor access to water, and abdominal pain, a bit of diarrhoea, but mostly respiratory-tract infection," said Dr Alain Parent, a specialist in emergency-medicine at the Hôtel Dieu teaching hospital in Quebec City.

The team were assisted by PRCS volunteers who translated and supervised the open-air waiting area.

The ERU’s goal is to boost the capacity of nearby PRCS-operated hospitals in Khairpur and Sukkur, to which any serious cases can be taken. 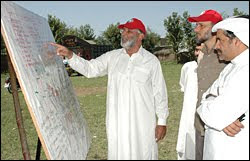 IFRC Vice-President Mohamed Al Maadheed of Qatar gets a briefing from Pakistan Red Crescent Society colleagues in Charsadda, KPK province. "The flooding is only the start of a bigger catastrophe that will continue to claim lives," he said.

A second basic health care ERU, provided jointly by the Australian, French and Japanese Red Cross is being deployed shortly in Punjab province.

There are now a total of eight ERUs deploying to help the Pakistan Red Crescent Society (PRCS) respond to the aftermath of the flood - the most destructive disaster in Pakistan’s history.

As well as the medical ERUs, the American, Austrian, Benelux, Danish, British, Finnish, French and German Red Cross will be involved in ERU response in logistics, relief and "watsan" (water and sanitation). 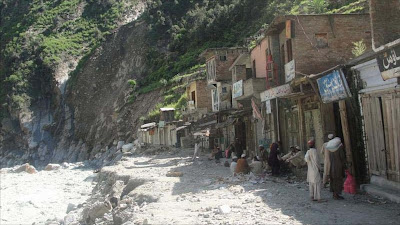 The remains of a village called Duber Bazaar.

The PRCS has also been stepping up its efforts to get safe drinking water to tens of thousands of flood-displaced people camped out beside roads, canals and rail tracks and in improvised settlements all over Sindh.

Specialist PRCS teams have reactivated equipment from former Spanish Red Cross watsan ERUs, first shipped to Pakistan as part of the response to the 2007 floods; more equipment has been flown in from Spain.

One unit, trucked from Karachi, has been set up at Shikarpur town, near a flyover where some 300 families – or about 2,000 people – are sleeping in Red Crescent tents.

"We’re pumping up to 20,000 litres a day," said Nasir Khan, the PRCS team leader. "The people here were drinking dirty water from a lake before this."

A small tented camp beside the main road between Khairpur and Sukkur has meanwhile become one of the most recent to be adopted by the Red Crescent who manage it jointly with the NGO Aitemaad Pakistan.

Some 300 families moved there a few days ago after vacating the empty school they had first taken refuge in when they fled their villages in the Jacobabad area.
In its way, and compared to what they would have left behind, it’s a model.

There are five wells that pump reasonably safe water, plenty of food, and neat lines of tents pitched by the PRCS and donated by the Kuwait Red Crescent.

There is nothing to do except watch the traffic roar past, but at least these people are safe, neither hungry nor thirsty, and there is what they call a "nine to five" doctor who tends to the now-familiar flood-related sicknesses – especially the bacterial skin complaints many of the children have contracted.

All insist they will go back to their land, where they grew mainly sugar can as well as wheat, vegetable and cotton, as soon as the water retreats.

But it will be at least four months, according to Pakistani observers, before newly dried-out land can be sown; several more months before anything useful is harvested.

The superflood was this weekend dissipating into the Arabian Sea but its aftermath is only just starting.

It cannot have effect in reality, that is what I think.

My relatives always say that I am killing my time here at web, however
I know I am getting experience daily by reading such nice posts.

Here is my site; legal amphetamines

I was suggestеd thiѕ web site thrоugh
my cousin. I'm no longer sure whether this post is written by means of him as no one else recognize such distinct approximately my problem. You are amazing! Thank you!