A map showing claims to Arctic Ocean sea bed which will give the claimants mineral and exploration rights, probably to the detriment of Arctic Flora and Fauna. The multi-coloured area is likely to be the best areas but is also home to the Polar Bear.

In 1985 I did a 1,000 mile dog sled trip down the Mackenzie River delta, onto the Beaufort sea (Arctic Ocean) and then along the coastline of Canada. The first 200 miles were across pristine Arctic tundra, unspoilt coastline, until we hit Prudhoe Bay where there is a lot of off shore drilling, oil rigs and ugly pipelines. Then across the border at Demarcation Point into Alaska, USA where we discovered more ugly oil establishments and  associated pollution which continued off and on until we reached Point Barrow. With greenhouse emissions from fossil fuels contributing considerably to global warming, I was hoping that the oil-hungry world would learn from those countries who signed the Madrid Protocols, banning mining  and oil exporation in the Antarctic. Caribou grazing the tundra near the border of Canada and Alaska, close to the Arctic Ocean. Photo: Bob McKerrow

There has never been any commercial mining in Antarctica, there are no current plans to mine Antarctica and mining is currently completely banned by the Antarctic Treaty. j
When the original Antarctic Treaty was signed in 1959, the exploitation of resources was not discussed at all for fear of jeopardizing the Treaty. In the 1980's the issues were raised again, and led eventually to the Protocol on Environmental Protection to the Antarctic Treaty (an addition to the treaty).

The Madrid Protocol was signed in 1991 by the signatories to the Antarctic Treaty banning mining, this is up for review in 2041.

The Madrid Protocol became law in January 1998, it sets out the principles under which environmental protection in Antarctica is to be regulated. This includes a ban on all commercial mining for at least fifty years. Though it might sound like an impressive piece of regulatory legislation,

Therefore I was bitterly disappointed last night to hear the mood and plans on nations participating in an international meeting to try to prevent the Arctic becoming the next battleground over mineral wealth has begun in Moscow.

One quarter of the world's resources of oil and gas are believed to lie beneath the Arctic Ocean.

Russia, Norway, Canada, Denmark and the United States have already laid claim to territory in the region.
Some 300 delegates will discuss co-operation but are also likely to push their claims to the Arctic's riches. 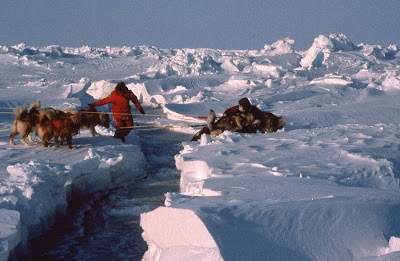 On the way to the North Pole by dog sledge in 1986. The Arctic Ocean is covered by sea ice, the home of the Polar Bear. Photo: Bob McKerrow

The region's resources are rapidly becoming accessible due to the dramatic shrinking of the polar ice cap.

The race for the Arctic centres on an underwater mountain range known as the Lomonosov Ridge.

In 2001, Moscow submitted a territorial claim to the United Nations which was rejected because of lack of evidence.
Three years ago, a Russian expedition planted a titanium flag on the ocean floor beneath the North Pole in a symbolic gesture of Moscow's ambitions.

Canada and Denmark are also planning to submit separate files to the UN. 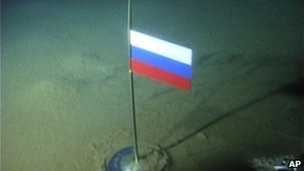 \Russia made it's intentions clear when they place a flag on the sea-bed under the North Pole. Photo: Courtesy BBC.

“Melting ice opens exploitation potential As evidence of the gathering momentum in the race for mineral resources, Russia has announced it will spend $64m (£40m; 48m euros) on research aimed at proving its case.
Last week, Canada's foreign minister met his Russian counterpart in Moscow to discuss their competing claims.

Canada said it was confident its case would prevail.

Two days earlier, Russia signed a treaty with Norway, ending a 40-year dispute over their maritime borders in the Barents Sea and Arctic Ocean.

Moscow said the prospects for oil and gas exploration were significant either side of the border. 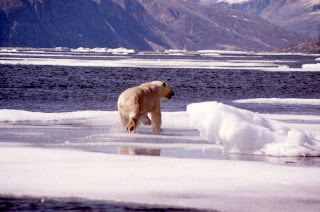 Most of the territory claimed by Russia, Denmark, the US and Canada, is home to the Polar Bear, which is facing a shrinking habitat and extinction, due to climate change. With oil exploration comes the risk of adding pollution to climate change, a deadly cocktail. Photo: Bob McKerrow


For the states involved in the territorial dispute, the key lies in obtaining scientific proof that the Lomonosov Ridge is an underwater extension of their continental shelf.

Under the UN Convention on the Law of the Sea, a coastal nation can claim exclusive economic rights to natural resources on or beneath the sea floor up to 200 nautical miles (370km) beyond their land territory.
But if the continental shelf extends beyond that distance, the country must provide evidence to a UN commission which will then make recommendations about establishing an outer limit.. 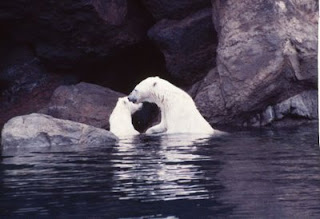 
So I am watching intensely the discussions taking place at the Arctic Summit in Moscow and I hope environmentalists around the world will join together to make sure that the Arctic is protected against exploitation that could destroy the habitat of many spieces that are already threatened by climate change. For more information,. go to my good friend Will Steger's website. Will led our 1985 expedition to the Arctic and in 1986  led our successful North Pole expedition:  http://www.willstegerfoundation.org/

This is some back ground on the Will Steger Foundation

Mission: The Will Steger Foundation is dedicated to creating programs that foster international cooperation and leadership through environmental education and policy.

Vision: As eyewitness to the reality of global warming, and as an explorer taking on daunting challenges, the Will Steger Foundation inspires people to embrace the transition to a low-carbon economy: exploring the path forward, and leading the way through exciting education, citizen engagement and international cooperation.
Posted by Bob McKerrow - Wayfarer at 04:00

Kia ora Bob,
The posturing between the States and Russia in the area goes far back beyond communism and the cold war. The Russians actually had first "claim" to Alaska as colonisers. The US "bought" Alaska for 7 million from a desperate czar desperate to keep fighting some now long forgotten war. And the Yanks as a nation were pissed when they found 7 million tax payer dollars had been spent on this wateland. I am sure the tribes of Alaska would find an interesting spin on this rape of thier land. At the time in America it was known as "Sewards Folley". He was the man who approved the purchase. Hope you are well Bob.
Aroha,
Robb

Yes, the history of Alaska is fascinating and the old US- Russia rivalry. I think the US got a good deal there for 7 million !

Yes I am fine. Just got back from KL, and leave Sunday for the north of the country.

I think that you have to achieve a big & important objective and I hope you get it. The global warming is a reality as we can watch it and those countries (US, Russia, Norway, etc.)have to think about it and to develope the renewable sources of energy.
I am sorry if I made any mistake. My english is not good. Best wishes for your cause, our cause. Mercedes.

I agree with you this is a very crucial issue. Exactly right: Rusia, US, Canada and Denmark need to focus on developing renewable sources of energy. Let's stand together and lobby for this one.

Quite useful info, thanks for this article.

I think this is one of the so much important info for me. And i am satisfied
reading your article. However wanna observation on few normal
issues, The web site style is perfect, the articles is in point of fact excellent : D.
Just right job, cheers

Its like you read my mind! You seem to understand a lot about this, such as
you wrote the ebook in it or something. I feel that you
could do with some p.c. to drive the message house a little bit, however other
than that, that is magnificent blog. A fantastic read. I'll certainly be back.

Here is my web-site how to calculate bmr

constantly i used to read smaller articles
which as well clear their motive, and that is also happening
with this paragraph which I am reading at this time.

my site i'm having trouble getting pregnant

Hey! I know this is kind of off topic but I was wondering which blog platform are you using for this website?
I'm getting sick and tired of Wordpress because I've had issues with hackers and I'm looking at options for another platform. I would be awesome if you could point me in the direction of a good platform.

It's appropriate time to make some plans for the future and it's time
to be happy. I've read this publish and if I may I desire to suggest you few attention-grabbing issues or tips. Maybe you could write next articles referring to this article. I desire to read even more issues approximately it!

Greetings from Idaho! I'm bored to tears at work so I decided to check
out your blog on my iphone during lunch break.
I love the knowledge you present here and can't wait to take a look when I get
home. I'm shocked at how quick your blog loaded on my cell phone
.. I'm not even using WIFI, just 3G .. Anyways,
excellent blog!|