Middle East Peace Talks - Gutsy negotiations. We have to pray for a resolution

Wow ! did you see and hear Hillary Clinton speak tonight ? Then the PM of Israel, Netanyahu,  followed by President Abbas. 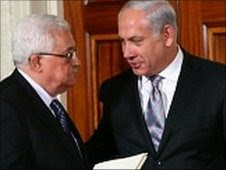 Have we got the beginnings of a new era ? Breaking news on the end of a century of bloodshed ?

I am convinced it is possible says Netanyahu. I agree.! Abbas agrees..

Where to from here ?

Thank God for Hillary Clinton. She knows full well the ups and downs of negotiations.

I am still watching President Abbas speak. What a day in Middle East history!

WHAT DOES THE BBC HAVE TO SAY ?


The talks, hosted by Hillary Clinton at the US State Department, are the first such negotiations in 20 months.

On Wednesday, President Barack Obama held separate White House meetings with the leaders, urging them not to let the chance of permanent peace "slip away".

On Wednesday, an Israeli man and woman were shot and injured when the car they were travelling in came under fire from another vehicle near the Jewish settlement of Kochav Hashachar, to the east of Ramallah.

The man is in a serious condition in hospital, Israeli officials have said.

The attack came less than 24 hours after another West Bank shooting in which four Israelis were killed.

The militant wing of the Islamist group Hamas has claimed responsibility for both attacks.

On Thursday, Reuters news agency quoted Hamas spokesman Sami Abu Zuhri as saying the group would continue to target Israelis, despite a crackdown that has seen dozens of its members arrested by Israel and the Palestinian Authority.

"Operations of resistance will continue and the measures by the occupation and Fatah will not block them," Mr Zuhri said.

The Israeli army has warned of a possible wave of attacks by Hamas militants trying to sabotage the Washington talks.

"There may be more attacks," Brigadier General Nitzan Alon told Israeli Army Radio. "The capability exists on the ground.

The militant wing of Hamas has claimed responsibility for this week's shootings of Israelis "We knew opposition elements like Hamas would try to carry out attacks to try and disrupt the diplomatic process," Brig Gen Alon said.

The BBC's Jon Donnison in the Gaza Strip says that as the peace talks get under way, Hamas seems to be sending out a message that it is not to be ignored.

Despite controlling Gaza, Hamas is excluded from the talks because Israel, the US and European Union do not recognise its authority.

As a result Mr Abbas, a rival of Hamas, will be negotiating in the talks over territory that he does not control - the Gaza Strip.

It is hard to see how there can be peace between Israelis and Palestinians, unless Fatah and Hamas sort out their differences first, our correspondent adds.

Speaking in Washington on the eve of the meeting, Mr Obama condemned the violence and warned about the threat posed by "extremists and rejectionists".


President Obama has started what will be an intensive diplomatic push.


He will have been pleased by what seemed to be a warm handshake between the Palestinian President Mahmoud Abbas and the Israeli Prime Minister Benjamin Netanyahu.

Even so, Mr Abbas is still insisting that Israel must stop building homes for Jews in the occupied Palestinian territories.

Mr Abbas has threatened to walk out of the talks on the settlement issue. It's not clear where the compromise will come from. Warm words alone won't do it - but perhaps Mr Netanyahu's were a start.

There might not be room for many more failures. The conflict is changing. A religious war is now being grafted on what used to be fundamentally a competition for territory between two national movements. You can make deals with nationalists. It's much harder with people who believe they're doing God's work.

However, he praised Mr Abbas and Mr Netanyahu as leaders "who I believe want peace".

Mr Abbas also condemned attacks on Israelis and urged an end to bloodshed.

Speaking about the forthcoming negotiations he said: "We will spare no effort and we will work diligently and tirelessly to ensure these negotiations achieve their cause."

Mr Netanyahu described Mr Abbas as his "partner in peace", and said he would not allow the latest violence to "block our path to peace".

"Our goal is to forge a secure and durable peace between Israelis and Palestinians," he said.

Mr Obama said the goal of the talks, which have been given a one-year deadline, is a permanent settlement that ends the Israeli occupation that began in 1967 and results in an independent, democratic Palestinian state existing peacefully beside Israel.

The talks are also being attended by Jordan's King Abdullah and Egyptian President Hosni Mubarak.

At the end of Thursday's negotiations, US Middle East envoy George Mitchell is expected to give a briefing on the outcome.

US officials have said that in this first round they want to at least get agreement from the two sides to meet again, possibly in the second week of September.

Jerusalem Borders and settlements Refugees Water Another meeting between Mr Obama, Mr Abbas and Mr Netanyahu could be held during the UN General Assembly at the end of the month.

King Abdullah said that for the process to succeed the group needed Mr Obama's "support as a mediator, honest broker and a partner".

"If hopes are disappointed again, the price of failure will be too high for all," he warned.

Disagreement over Israeli settlement construction in the occupied West Bank has also threatened to cast a pall over the negotiations.

The Israelis have said they will not renew a partial freeze on building homes for Jewish settlers when it expires towards the end of this month.

Palestinians say that without a freeze they will walk away from the talks.
Posted by Bob McKerrow - Wayfarer at 07:44