The smell of whitebait cooking in the pan has my mouth watering like no other food and the delicious taste turns a sane man into a gluitton. It has moved me so much that I have written two poems about this nobel fish that I would like to share with you today.  The highly regulated activity of whitebaiting has a particularly short season on the West Coast on New Zealand, where it has become part of the fabric of society.


By the end of August each year, the rest of New Zealand has had a couple of weeks to pursue the tiny fish that inhabit the lower reaches of the country’s rivers and coastal streams. On the west coast of the South Island however, whitebaiters have to wait until the first day of September before they can put their nets into the water. The regulations that control whitebaiting are essential for the fish’s conservation, and the periodically lean pickings of recent years have only served to highlight the need for strong measures. 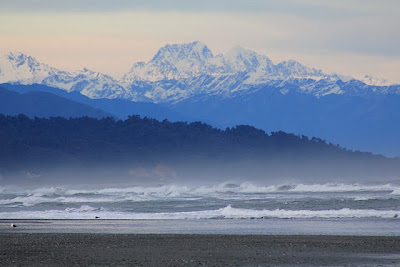 The views you get of the Southern Alps while whitebaiting, are as delicate as the fish themselves. Here is Aoraki Mount Cook and Tasman just south of the Hokitika river mouth. Photo: Bob McKerrow


Whitebait is the collective name given to the juveniles of several species, by far the most common of which is the inanga (Galaxias maculatus). Having been swept downstream in the autumn as larvae to start maturing at sea, the young fish seek out a return to freshwater as the winter draws to a close. They will spend the summer in the inland waterways, before spawning in the vegetation of the stream and riverbanks and completing their lifecycle. Here is my first poem about whitebait.


Red-hatted Sue
How well I remember
Your beauty on opening day
Last September.


You hold your net
With such grace and poise
And scoop with a rhythm
Not a sound, not a noise.


When the ‘bait was running
A few weeks ago,
You showed no emotion
How my admiration grows.


Red-hatted Sue
I can never forget,
Watching kilos of whitebait
Running into your net.


My heart jumped with envy
For you and your style,
But I am still waiting
For that first smile.


I’m dying to ask you
How you cook your bait,
With egg or onion
Or do you eat them straight ?


I’ve got some good recipies
In my refurbished kitchen,
And would love to serve you
Inanga and pigeon.


So Red-Hatted Sue
I fantasise when I’m baiting,
Every day at the river mouth
While you are waiting


For you clearly
Are the best catch
There’s no net big enough,
No man that’s your match


I seriously think
I’m the one for you,
We could live in a baiters shack
Just me, and you
Red-Hatted Sue 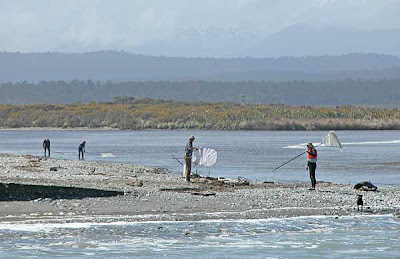 Ribbon-like white
Streaks the high horizon,
Where the ice oozes
Vertical to green.

The rugged West Coast of New Zealand's South Island, the home of whitebait.
Posted by Bob McKerrow - Wayfarer at 19:01

Kia ora Bob,
When I first moved here in 1993, I found myself at a place where a kind soul asked if I would like to try a white bait fritter, and showed me what they were. I must admist the sight of all those tiny eyes staring at me made me gulp a bit, but I have always been keen on trying new foods. The first mouthful of that simple and delightful fritter is still with me. A taste that I cannot really describe except as delicate and delightful with a hint of the sea.
Man, I am hungry now. Some smoked mussels will have to do on this stormy day. Hope you are well.
Cheers,
Robb

Yes that first taste of a fritter is overwhelming, because it is so delicious, and yes, those tiny eyes looking at you, can put you off.

Terrible weather in NZ at the moment. I feel for the lambs.