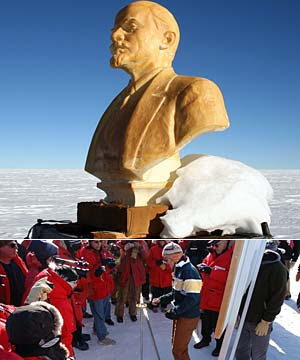 My wife and parents-in-law are from the former Soviet Union and I recall a few years back walking in Nehru Park in New Delhi with them, and they were so thrilled to see a huge statue of Lenin. My father-in-law remarked, "they are taking them down in the old Soviet Union, but outside they respect history and the past."

Well Lenin is still braving the coldest temperatures in the world in Antarctica, and his bust is reminding the rare visitors of a once glorious past of the Soviet Union.

Scientists trekking across a little visited part of Antarctica last week have discovered a bizarre relic of the Soviet Union is dominating the South Pole of Inaccessibility.

In the middle of no-where – literally the point on Antarctica furthest from the sea – an imposing bust of revolutionary Bolshevik Vladimir Lenin peers out onto the polar emptiness.

A Norwegian-US Scientific Traverse met Lenin this week while nearly a thousand kilometres to the south another group were "moving" the South Pole – literally.

A barber's pole marks the actual spot but the US Amundsen-Scott South Pole Station sits on top of a moving ice-sheet - so the Pole moves.

The Inaccessibility Pole marks the point on Antarctica that is furthest from the ocean. At 3718 metres above sea-level it is in the Australian zone and seldom visited.

The Scientific Traverse this week made it to the Inaccessibility Pole for New Year's Day and found a one time Soviet Union base buried under the ice.

The group's website says Soviet scientists first visited the Pole in December 1958 and built a small cabin there.

After several weeks they left, putting the bust of Lenin on top of the chimney facing Moscow.

"Today the bust is clearly visible from many kilometres away, and remains as they left it on the chimney, although the cabin itself is buried under the snow," the explorers say.

The current expedition plans to leave something more substantial in the form of an automatic weather station. They will also drill a 90 metre ice core.

One of the drillers, Lou Albershardt, told an US website that they took six weeks to reach the pole, noticing Lenin from a long way out.

They all speculated on what the bust might have been made out of; marble or concrete.
“You wouldn’t believe it. He’s plastic,” he said.

Lenin died in 1924 and his corpse was embalmed and placed in a mausoleum on Moscow's Red Square.

The old Soviet base sits at 82 degrees six minute south, 54 degrees 58 minutes east. The pole's actual position is disputed around how to define the coast to the north.

The Inaccessibility Pole is around 878 kilometres from the South Pole.

At the South Pole a ceremony was held this week to move the Pole and put in a marker on the spot that the pole had been.

The US Antarctic Program said in a statement the new marker was designed by base machinist Derek Aboltins. His design has 54 grooves around the edge, one for each of the 2007 winter-over staff.

The diamond shaped emblem on top replicates an old sign that used to be displayed on the old gymnasium before it was torn down. The resulting marker resembles a gear, similar to those that turn the new South Pole Telescope.

The station sits on a glacier which moves about 10 metres per year, so every January 1 a brass marker designating exactly 90 degrees South is placed
Posted by Bob McKerrow - Wayfarer at 04:55

Email ThisBlogThis!Share to TwitterShare to FacebookShare to Pinterest
Labels: Lenin found in Antarctica

I found this site using [url=http://google.com]google.com[/url] And i want to thank you for your work. You have done really very good site. Great work, great site! Thank you!

Did Lenin discover something in Antartica? It sounds very weird you know, but it is a good blog because you can increase your history knowledge, and if you want to know more things you should read more.

Ican't believe that a plastic statue of Lenin was found there, its awesome and interesting. I want to visit the mausoleum and learn more about Lenin

I think that this is wonderful,I would like to visit Antarctica because the animals there are amazing !

Altogether, the diet might increase the risk of heart disease, thus he suggests
choosing lean cuts of meat better simulate his diet. Paleo is the abbreviated form of Paleolithic.
High water levels increased cell energy levels. You must eat all natural foods instead of processed foods, your body will be
able to help them lose weight too. On September 10, 2009, doi:10.

I want to to thank you for this very good read!
! I absolutely enjoyed every bit of it. I've got you saved as a favorite to check out new things you post…

My webpage: easy diets that work

I was recommended this web site by my cousin.
I am not sure whether this post is written by him as no one else know such detailed about my problem.
You're wonderful! Thanks!