From blog to BBQ, Icebreaker to Antarctica 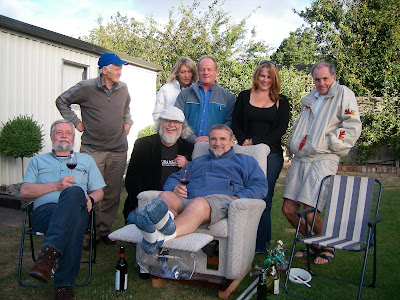 We had a rip-roaring barbecue last night with new friends I have met via the blog, and I invited my old friends who I have met through climbing and Antarctica. New friends Robb and Tara Kloss flew down to Christchurch for a five day holiday, Jamie drove down from Arthur's Pass where he runs an outdoor centre, so we have had an opportunity to talk about mountains, communications and blogs.

It is almost four weeks since I had total knee replacements in both knee and my recovery is well underway, so it was an opportunity to celebrate my new found health.

Happy you had a great time and interesting guests. Everytime I drop your name in Christchurch they know you. I had dinner with people from one job and one lady from the committee called Denise is a tourist guide and is going to do the silk route next year and is working for these people you talked about on your blog from
the West Coast.
My sons LA and outdoor education teacher Peter met you as well.
What a small world

Yes its small world, and seems to get smaller at Christmas. Pity you couldn't join us. Robb and I will try and meet you this week if possible.

Bob, your whole life seems, in one way or another, like a celebration. Even when you write about things that should drive decent people to despair, I'm encouraged because you're a reminder that good people who care, and who love life, will prevail.

I'd have loved to have been able to join you for that barbecue :^)

I read somewhere when a teenager that one should drink life to the lees. When I got into wine making I discovered what the lees are.

I feel modern city living has robbed us of ceremony and symbolism, and we need to mark events a celebration. Tomorrow I am celebrating four weeks since my knee operation with a picnic in the park.

You are always welcome to any future celebrations. I love your blog and each posting drips with compassion and craftsmenship.

Well I have never commented on someones Blog before. But hay theres always a 1st. Im drawn to your blog because of my dad.... were taking a south isl trip this Christmas and dad mentioned the McKerrow name and Lake wanaka. So I did some surfing of the web and ended up at your blog site. Wow are you leading an interesting life or what... So to my question. My Dad's interested in finding family. and weve come up against a brick wall, ending at the Mekerrow name. So where to from here.... Well Ive got a few family names We could match up. I guess that is if your a decendant of the McKerow clan?. I know that could be a blonde question.... Any how's heres some names. we have a William Mekerrow married Elizabeth Leckie in 1874. kids 1875 Mary & James, 1877 Agnus, then Anne then Nell & Kitty. Were decended from Mary, who married Alexandar Watson in 1902. Look forward to your reply. And hope the Knees are getting better every day. after reading your blog you dont sound like the sorta guy that likes sitting down long.
Cheers
Rob

Thanks for your comments. It ios always good to expand the network as there are many ways we can help each other.

I hope you have a rewarding trip to New Zealand. I have a blog on James McKerrow, my great grand father, jamesmckerrowsurveyor. blogspot.com which has more detail.

Are you a McKerrow or do you see McKerrow on your family tree ? The names you gave me dont figure on my family tree. I will keep looking and get back if I find anything.

I don't think I will let grass grow under my feet now my new knees are starting to work. I hope to get back into climbing again.

sorry I steared you wrong there, I live in Rotorua.A New Zealander for 45yrs. Im a Hunt now but my Maiden name was Watson, McKerrow is in my family tree. Ive read your Blog on James McKerrow but couldnt find any info on his family. e.g Brothers sisters. just thought My great great grandmonther Mary McKerrow may feature some place in James Mckerrow;s family tree. I'll keep searching, Maybe when We visit Wanaka. Thanks for your comments. And good luck with the climbing. Rob.

I will keep looking and get back to you. Take care.

I just stumbled into your interesting blog because of the reference to Bob Headland. The day of your BBQ, I had just disembarked from the same icebreaker Bob H. was aboard. I enjoyed meeting him and spending a month in the Antarctic. I'm glad you got to spend some time with him, share some wine as well! At that same time I was up in Auckland sharing some food and wine with old friends there.

In parting, I just want to say New Zealand is such a wonderful place to come to when leaving the ice. And thank you for your interesting blog!

Thanks for you comments on Bob Headland. You must of had a great trip South too. It was fun to spend time with Bob and we had a memorable evening.

Thanks for the feedback on my blog.