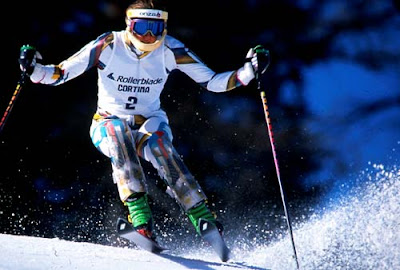 Skiing champion Annelise Coberger was the first New Zealander to achieve international fame in the sport. At the height of her career she won a silver medal in the slalom event at the 1992 Winter Olympic Games. Here she is competing in the World Cup slalom, in Italy in 1993. Hopefully, the Winter Games to be held in New Zealand in Aug-Sept. 2009, will give up and coming NZ winter sportspeople a chance to make a bid for the next winter Olympics. 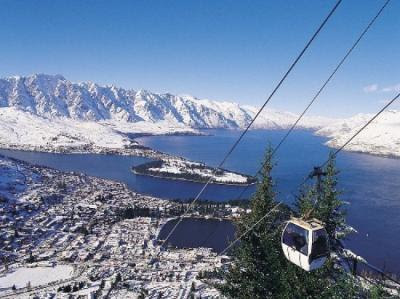 Queenstown with the Remarkables in the background, one of the key sites for the 2009 Winter Games.

I saw Arthur Klap on TV the other day speaking in his capacity as one of the organisers of the Winter Games to be held in the mountain areas of Otago and Southland next year. I met Arthur in the late 70's in Chamonix, France, where he and his partner Lynn were into free style skiing. Arthur has been out front in New Zealand as an event organiser for decades. As a teenager I criss-crossed the mountain ranges where these events will be held I recall doing a winter ascent of the Remarkables in 1967 and thinking, " Wow, this would make a brilliant ski field. "I skied a lot on Coronet Peak, skated at Naseby in winter, tramped the hills and mountains round Lake Wanaka. I recall looking down with Rod McLeod from the summit of Mt. Aspiring in early 1968, across the mountains of Otago and Southland. I am so proud such a prestigopus event is being held in New Zealand.


The largest winter sports event outside of the Winter Olympics, Winter Games NZ is a unique winter sports competition that provides the world’s elite winter sports athletes with the ultimate testing ground where they can experiment and explore performance limits against world class competition.Every four years, the Games will act as a direct lead-up to the Winter Olympics providing athletes with an invaluable training opportunity. The first Winter Games NZ will take place at Coronet Peak, The Remarkables, Cardrona Alpine Resort, Snow Farm, Naseby and Dunedin from August 28 to September 6 2009 and will feature disciplines of alpine skiing, free skiing, x-country skiing, snowboarding, curling, ice skating and adaptive snow sports.
Fri 28 Aug 09 - Sun 06 Sep 09, every day,
Posted by Bob McKerrow - Wayfarer at 16:35

The winter games are so important to establish ourselves as a winter sports nations. The grunt has been going on for years. We have made it.

Great article! That is the type of information that are meant to be shared across the internet.
Shame on the search engines for no longer positioning this put up upper!

Come on over and consult with my site . Thanks =)

When I initially commented I clicked the "Notify me when new comments are added" checkbox and now each time a comment
is added I get four e-mails with the same comment. Is there any way you can remove me from that service?
Appreciate it!

Have a look at my page - graco magnum x5

I'm gone to say to my little brother, that he should also pay a visit this web site on regular basis to obtain updated from hottest gossip.