Japanese climber no stranger to dangers 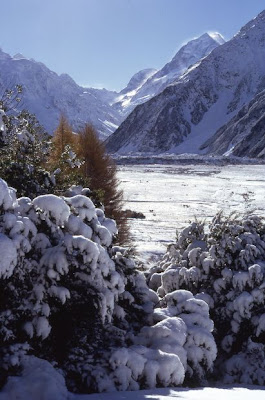 The weather everyone is wating for. A clear day to rescue the two climbers. Photo Bob McKerrow


Tomorrow must be the day, or Saturday at the latest. I was a little more encouraged about the survival of the two climbers after reading this NZPA article and listening to members of the resue team earlier this evening. Let's continue out thoughts and prayers for them.

NZPA © A Japanese mountain guide, one of two men currently trapped on Aoraki/Mt Cook, is no stranger to the perils of New Zealand mountain climbing.Kiyoshi Ikenouchi, 49, from Tokyo and Hideaki Nara, 51, also from Tokyo, remain stranded today as rescuers wait for a break in the foul weather to attempt to pluck them to safety.
Yesterday, a helicopter managed to get close enough to drop a pack of emergency provisions and a radio to the pair, but was unable to land.
During the drop, one of the climbers emerged from their red tent and waved, easing rescue team concerns about a lack of life on the mountain.
Japanese-speaking Department of Conservation officer Karen Jackson has tried to make radio contact with the pair but there has so far been no response.
In a strange coincidence, she was Mr Ikenouchi's interpreter when he climbed Mt Aspiring in 2001.
Three years later Mr Ikenouchi was part of the rescue team that helped when two Japanese climbers were hit by an avalanche on Zurbriggen's Ridge on the mountain. One of the climbers died.
Ms Jackson recognised Mr Ikenouchi in the visitor centre last week and talked to him about his current climb.
Inspector Dave Gaskin, of Timaru, said yesterday police were not too worried by the lack of radio contact from the climbers as the pack had been dropped from 10m and could have been damaged.
Also, it had landed behind the tent and as they were not "out enjoying the view" they may not realise it was there, he said.
It was also possible the men were stranded in an area with bad reception.
Mr Gaskin said today the climbers were "pretty well off, much better than I thought they'd be".
The weather was still "wet, snowing and blowing" and the safety of the rescue crew was the main concern, he said.
Winds are still high in the rescue area where the two men have been trapped above 3700m since last week, and Mr Gaskin said it could be Saturday before the pair was rescued.
The Alpine Rescue Team is on standby to carry out the rescue whenever there is a break in the weather.
They may attempt to drop another pack tomorrow if the weather does not clear enough for the rescue.

Kia ora Bob,
Just woke up to news one guy is off, a bit sad to read they had to spend the night in the open. Hope the other guy is alive as well.
Cheers,
Robb

Just found out at 8 am the second guy died during the night. Every minute at that altitude and temperature s crucial. As a member of the Mt. Cook rescue team for a number of years, I could see the one live, one dead scenario developing.

I will say a few words to Maunga.

When we refer to Japan, we will think of earthquake. It is suprised if the Japanese climbers are happy to accept the danger