Why do you get so involved ? Aoraki Mount Cook. 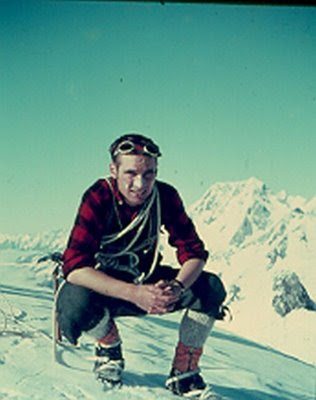 Late December 1967. My first ascent of Mount Malte Brun. Mount Cook/Aoraki in the background. I climbed Aoaki Mt. Cook for the first time on Christmas Day, 1968. 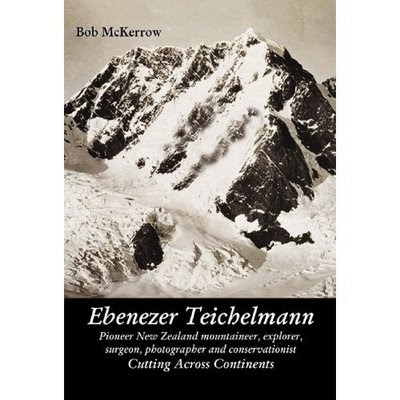 The cover of my book on Ebenezer Teichelmann, which in many respects, is the history of climbing in the New Zealand Alps from 1897 to 1938. Teichelmann took this wonderful photo of the East Face of Mount Cook with the summit ridge of the skyline. The Japanese climbers we sheltering just below the ridge at the far left.

If you have an opinion, there will be someone out there who will agree or many who may disagree. If you stand for nothing, you will fall for anything. During the past week I got totally engrossed in the rescue of the two Japanese climbers stranded on Mt. Cook Aoraki. An old climbing friend phoned me and said, " Are you the watchdog for NZ mountaineering ? "

I simply replied "when you have been climbing, writing and photographing for over 40 years, and tred many times the ridge the climbers are stranded on, I feel I have an opinion to offer that may be of use." I felt I didn't need to add more, but thought, I was the first person together with Glacier Helicopter pilot Colin Tuck, to fly in less than an hour after the summit fell of the high peak of Mount Cook on December 14, 1991. We flew the summit ridge and saw the miussing summit scattered from the summit of Aoraki across the valley floor to 3,000 metres on the other side of the Tasman Glacier. I was running the Westland National Park out of Franz Josef. I have never felt so insignificant in my life seeing the fury of one mountain's energy, Aoraki. It was at that moment I realised the meaning of Tapu or Wairua Tapu. Maori mountaineers from Brice Bay, Tai Poutini, knew the summit of Aoraki was Tapu and would not set foot on it. When they were with guided parties they would deliberately, but quietly, avoid putting a foot on the true summit. The summit is the head. You never put foot on the head for the head is Tapu.

Then there were those memorable three days in 1973 when Aat Vervoorn and I guided Vern Leader on a grand traverse of Mt. Cook Aoraki. Vern was 64 and it was the last great climb he wanted to do before he hung his ice axe up. This was also the last guided climb done by the Mt. Cook National Park.

Next to come flooding back, was another Christmas Day climb, in 1971, with Chris Timms by the East Ridge of Aoraki.

I suppose one doesn't have to defend ones thesis but rather to explain where the passion and understaning comes from for a mountain. For some, a mountain is a dead inanimate thing, for me mountains have a personality, a beauty, a Wairua Tapu but always alive with a death that sings. The mountains song is enchanting, fit for mountan Kings, first its high, then its low, lachromoso from the strings.

I am not on the same line as you. I don't know much about mountains as I am from one of the flattest countries on earth: Holland
For me getting to know another person is like getting to know another country with a new culture with new habits and customs. I am slowly getting to now your country and I am somehow getting intrigued by the mountains.
Still amazing that Dutch names are keep up showing in yopur posts.
Take care

The Dutch had a huge influrnce on NZ fron TASMAN TO THE GREAT KNOTTENBELT. I WOULD LIVE TO WRITE ABOUT KNOTTENBELT FATHER AND SON, AND THEIR INFLUENCE ON NZR GAIKE IS ABOUT 50 AND LIVES IN CH CH. ANOTHER TIME. TKS FOR YE COMMENTS. BOB

You're one of the watchdogs for New Zealand mountaineering. As we talked about the other day I think the work you do in getting some mountaineering info and history out there on the web is hugely important.

The mountaineering community is closeted in their alpine journals and the (very good) Climber magazine. To give the wider community an opportunity to read these stories and appreciate the achievements of our pantheon of climbers and explorers is really important.

I will have to re-read that Maori mountaineers article sometime soon.

Thanks Jamie. It was good to have a few Speights together yesterday and talk about many things.

Thanks for your encouragment. I agree, we need to take the nuiances of mountaineering and exploration to a much wider audience. We also need to show the human face and how the mountains have shaped the NZ character and how NZers have shaped the mountains. ( Mainly by hydro electric schemes.)

I wish it was limited to hydro-electrics! At least HE's have benefits.

Our pantheon of organic stuff ups: Hare, Hieracium, Stoats, Cats and Mice...and the inbalances they have created, eg plagues of grasshoppers, are slowly reducing our mountains to skeletons that only the most goal focused mountaineer will enjoy.

Yeh, if you scratch the surface you find a lot of poor decision making in the mountains.
Lets finish this one off over the weekend.

You might have some snow falling up there tomorrow.