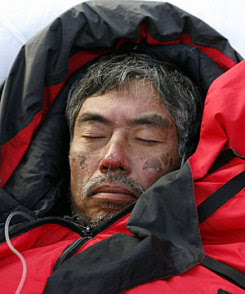 SURVIVOR: Japanese climber Hideaki Nara is lifted to Christchurch Hospital after being airlifted from Aoraki/Mount Cook. 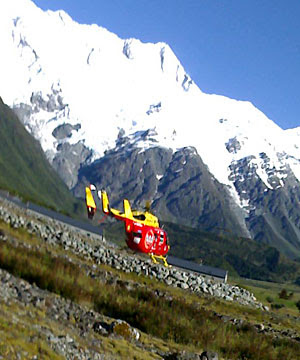 Japanese mountaineer Kiyoshi Ikenouchi, who died just hours before rescuers reached him on Aoraki/Mt Cook this morning, helped in a rescue on the mountain five years ago.
The 49-year-old from Tokyo and his companion, Hideaki Nara, 51, endured seven days at 3700m on the country's highest peak in ferocious weather conditions which prevented earlier rescue attempts.
Good weather this morning allowed the rescue to go ahead but rescuers found Ikenouchi, the guide on the expedition, dead on the mountain.
Nara was airlifted from the mountain and suffered frostbite to his hands and face. He was able to walk to the helicopter.
Constable Paul Swanson said Nara was talking to an interpreter but was very unwell.
Ikenouchi and Nara are understood to have lost their tent on Wednesday and may have had only one sleeping bag between them.
The pair were in contact during the night but lost verbal communication about 1am.
But when daylight and a rescue helicopter arrived this morning, Ikenouchi was discovered dead.
The men spent last night in the open as their tent either became buried in snow or blew away, said Inspector Dave Gaskin.
"The guy (who was rescued) was on top of the snow," he said.
After days of rescue attempts thwarted by bad weather, a helicopter was yesterday able to get close enough to drop a pack of emergency supplies and a radio to the tent site, but once again wind prevented a rescue.
The conditions finally cleared this morning and the rescue team flew in by helicopter at 5.30am.
The position where the climbers were holed up meant a rescuer had to hang from a long rope beneath the helicopter and scoop up the climbers in seperate trips.
"It's pretty perilous sort of stuff," said Gaskin. Thanks to Stuff for permission to use photographs and great undates during past 5 days..

I must say I am proud of our rescue services, helicopter pilots, DoC rescue team and staff. and the media for excellent reports. Let's not get into the blame game. We should be beyond this.

Indeed be proud of the rescue team. You must be hurt by such news having had simular experiences.

It is sad but we all have to be responsible for our actions. Risk management allows little room for error.

Thanks for your thoughts.