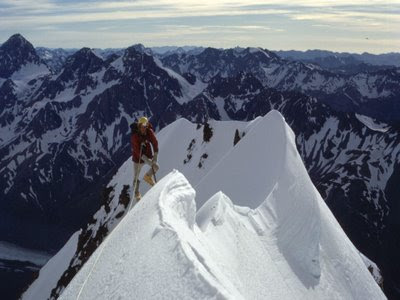 On the upper secion of the east ridge of Mt. Cook Aoraki not far from the summit ridge where the Japanese climbers are trapped. Climber is Chris Timms. Photo: Bob McKerrow

Japanese climbers have pitched a tent in the same area on Mount Cook in which two New Zealand climbers were stranded for 14 days, known as the Middle Peak Hotel schrund.
My prayers and thoughts are going out to the two Japanese mountaineers caught in an eerie repeat of the high-altitude drama on Mount Cook that cost Kiwi climber Mark Inglis his legs.
The climbers, aged in their 40s, remain trapped in the same spot on the country's highest peak where Inglis and Philip Doole were stranded in November 1982. Inglis and Doole miraculously survived for 14 days, wedged in a crevasse.
Inglis' frostbitten legs were later amputated below the knee. I got to know Phil well when we both worked for DoC soI know his story well.

On Christmas day 1971 I climbed the East Ridge of Mt. Cook with Chris Timms and when we hit the summit ridge we got caught in the most horrific blizzaed condition. It was either dig in, die or try to descend into the Hooker Valley. Neither of us knew this route so we took the gamble and almost lost our lives getting to Empress Hut. But like Ingles and Doole we survived.

One of the Japanese men was spotted outside his tent on the Middle Peak summit by a helicopter crew yesterday morning, but the winds were too strong for a rescue.
Inglis said the pair could be battling an even tougher predicament than what he had faced.
"We only came in to the storm when we got out on the summit ridge," Inglis said. "They were climbing from the west so they've actually been in the brunt of the storm. They were actually climbing up in the storm, where we were trying to climb down."
The Japanese climbers face another two days of cold, wet weather on the exposed southern ridge as rescuers wait for better weather. The area was dubbed Middle Peak Hotel after Inglis and Doole's two-week stay.
By yesterday, the Japanese climbers had spent at least five days 3700m up the mountain after failing to return to Mount Cook Village on Saturday.
They set out for the summit last week and were seen on the upper Empress Plateau on Friday.
After studying a photo of the climbers' tent site, Inglis said the men seemed to be "tucked away enough out of the wind".
"It sure looks like Middle Peak Hotel. Good luck to the guys up there, I hope they have plenty of resources and experience to come through it in a good condition," Inglis said.
"It's going to be very, very cold and it comes down to the equipment you have got. If you have got good equipment you have an advantage, but the longer it goes on the more resources you use."
Police area commander for Mid-South Canterbury, Inspector Dave Gaskin, said one of the men was spotted by a helicopter crew just before 8am yesterday waving from outside a tent.
"It was too windy to attempt to get to the scene at that moment. The plan was to drop a bag with a radio and some supplies to them," he said.
However, the weather had "bombed out" shortly after the sighting and made it impossible to drop the supplies.
"Landing was totally impossible. It's impossible even to hover in those conditions," Gaskin said.
A poor weather forecast could mean the men would have to wait until tomorrow night or Friday morning to be rescued.
"It's still a concern that they are up there because they are in an exposed area, but they are a lot better off than they could be. They've got good gear and they are reasonably well-equipped," Gaskin said.
The Japanese consul to New Zealand, Shoichi Kawai, said the two men hailed from Tokyo.
He would not reveal their names but said he had personally been in touch with the wife of one of the climbers. The family of the other man could not be reached, but it appeared the two men were experienced mountaineers.
Kawai said the family of one of the men had decided to delay coming to New Zealand until further details emerged about the rescue.
"One person is now moving. Another person, nobody knows where he is. If he is inside the tent, how he is? He may be injured so cannot go out," Kawai said.
New Zealand Alpine Club executive officer Ollie Clifton said the sighting was a good sign.
"It would give me a reasonable amount of confidence that they are prepared to sit it out and probably do have the other kit which you need to keep reasonably dry and warm.
"The wind speeds would be amazing. You are in a very exposed position."
They would need to make a "situation-specific" decision about whether they stayed put or moved. It was important that they rationed their food and stayed hydrated.
The Department of Conservation in Mount Cook Village said it was possible the rain could clear briefly this morning, although the winds may still be strong.
Rescuers were hoping the weather might ease and give them a chance to deliver supplies to the men or rescue them

Kia ora Bob,
My thoughts are with these guys as well. I read Inglis's book and have seen him speak several times. Hopefully their experience will mean these guys are well equipped. What thoughts must go through your mind when in that situation, or does the mind go into to soimple survival mode.
I would love to go to the Mount Cook area. How far is it from Christchurch? Are your new knees up for a trip? I think Tara has sent an email to you, but I will contact you via that as we will be down there soon. Have a great , and pain free day Bob.
Cheers,
Robb

I really pray the get off alive today. Every day stuck up there ois an ordeal beyond description. It would be great to get up to Mt. Cook.

Mother nature has no remorse, may they have the strenth to survive from its claws

Yeh, Marja. When you go onto the mountains you must know the history, the weather, the people who have died before you. It is all in the lap of the Gods and the rescuers.

Let's pray they get out alive.

Greetings from California! I'm bored to tears at work so I decided to browse your site on my iphone during lunch break. I love the knowledge you present here and can't wait to take
a look when I get home. I'm shocked at how quick your blog loaded on my phone .. I'm not even using
WIFI, just 3G .. Anyhow, fantastic blog!

Feel free to surf to my web-site ... fastest way to lose weight