Japanese climber Hadeaki Nara speaks of his six-day ordeal trapped near the summit of Mount Cook. 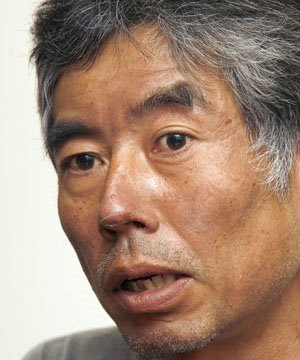 For those of us involved in some way with this tragic death on Mount Cook late last week, closure has been reached. The Christchurch Press ran a front page article this morning which is mainly an interview with rescued climber Hideaki Nara. Here is his story.

For hours, Japanese climber Hideaki Nara huddled in the snow, desperately digging an ice cave with a pen and small knife as icy winds blasted across Mount Cook.
The lone survivor of the six-day ordeal on New Zealand's highest mountain yesterday told his story in Christchurch, including his discovery that his friend, Kiyoshi Ikenouchi, had died only hours before a rescue.
Nara, 51, and Ikenouchi, 49, were trapped about 3700m up the mountain in bad weather last week. Rescuers made the most of a brief break in the severe conditions to fly a helicopter to the men early on Friday.
It was only when Nara went to tell Ikenouchi that they were saved that he realised his friend had succumbed to the freezing temperatures. The two men had spoken during the night.
High winds on Friday morning gave Nara little hope of being rescued that day, so when a helicopter appeared he felt "very lucky".
Nara said a massive snowfall buried their tent on Thursday.
"When it collapsed, Ikenouchi was in the tent and he was trying to escape from the tent and bring his stuff with him, but he could only bring his sleeping bag, not his tramping boots," Nara said via an interpreter.
He said Ikenouchi had a sore back from being cramped up in the tiny tent for so long and had opted to stretch out in his sleeping bag rather than share the small ice cave Nara had created.
"On the last day there weren't many words between us; only one or two maybe, trying to encourage each other, but I had to think about myself as well. I really told myself to fight this difficult situation. I tried to move my hands and toes. I did whatever I could think of to keep me going," Nara said.
"I thought about my family and people that know me; if I died here that would have a big impact on them. I didn't want that to happen."
A helicopter managed to drop emergency supplies and a radio to the climbers last week, but it was never recovered. Nara said the pair had heard something hit the tent, but thought it was falling ice.
He did not know why he had survived, while his friend died.
"I don't know what was the crucial thing that made our lives so different. The only thing I know is that I was curling up inside the snow cave and Ikenouchi was in the sleeping bag outside," Nara said.
"Because I didn't have a sleeping bag, I knew it was important for me to stay in the cave, because it was very cold outside. It was an awkward position, but I knew that's what I had to do."
Nara attended Ikenouchi's funeral in Christchurch yesterday, along with the 49-year-old climber's wife, mother and friends who flew in from Japan.
"While I was in hospital I couldn't feel what happened was real, but today I saw him at the funeral and finally what happened sank in. Really, there's no words to describe how I feel, but I felt I had a big hole inside me a feeling of loss."
Nara said he had known Ikenouchi for 15 years and they had climbed many mountains together in Japan.
"I haven't decided whether to climb again. I wanted to go back to Mount Cook if Ikenouchi was alive to try again with him, but now he has passed away, so I'm thinking about my mountain-climbing future."

How are you doing with you physical therapy now that the surgery is over?

Well I'm delighted that you have kept me posted on the situation of those two Japanese moutaineers who met tragedy on Mt. Cook. Thank heavens the mountain did not take both men. Thank you for the extensive on-going reporting of this tragic incident because I wouldn't have heard much about it only perhaps a sound bit. You are such a caring soul, always thinking about others even though you are going through a healing process right now.

The healing goes on but its not easy. One hours sleep a night and still quite a lot of pain. But I can see the light at the end of the tunnel. I had the operation 3 weeks ago today, so time is passing.

I am pleased you found the reports of the Japanese climbers of interest. There is much we can learn from this. I hope your new New Zealand poetry is going well. I look forward to reading your gems.