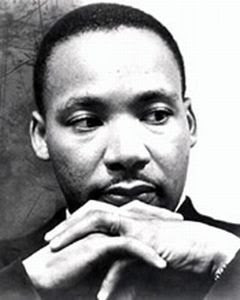 I got came back to New Zealand just over three weeks ago to get total knee replacements of both knees. As I go down the long path of recovery, for the first time in many years, I have time to listen to the radio, read newspapers and magazines from cover to cover, and choose from 100 satellite TV channels. There is a lot of negative stuff going on out there. Look at the rioting in Greece, terrorism in Mumbai, the ongoing slaughter in Afghanistan and Iraq, the cholera in Zimbabwe, violence in Dafur, and in my own backyard, the brutal killing of Abdulrahman Ikhtiara, a taxi driver who came to New Zealand as a refugee from Afghanistan. The 39 year old father of five.
More than ever in my lifetime, we need global leadership to pull us out of a moral and economic mire.

This morning Martin Luther King Jnr words posted above, kept swirling in my mind and these words remain, to implore our emerging leaders to act in accord with Luther's words of wisdom ' "there comes a time when one must take a position that is neither safe, nor politic, nor popular but one must take it because one's conscience tells one that it is right."

Barack Obama is slowly bringing together a group of leaders around him and heads are turning from every corner of the globe towards him. I try to look beyond "the whine and thump of NZ parish pump politics" but fail to see leadership here. A Government's first priority is the safety of its people and the feeble way our Government responded, or didn't respond, to hundreds of New Zealanders trapped in Thailand a few weeks back, doesn't auger well.

Kia ora Bob,
Hope you had a comfortable and prosporous weekend. I am really looking forward to seeing you soon.
Yes, I am afraid we Kiwi's will find we got the government we deserve through apathy and resigned acceptance of needed "change".
Why, when the worlds economic systems are proved failing, and have enriched such a small number of entitled people, do we continue to prop it up? Why do decide to vote in the very people who "have run big business", who "underestand what it takes to get things back on track"? Key and his cronies will run rough shod on our environment in order to keep the corpse of our economy going.
We do need dynamic leadership Bob,and people such as yourself who are actually doing something. But I feel we also will soon need leadership that recognizes there has to be some serious fundemental changes to our realtionships with money, with each other, and the Earth.
Sorry for the rant Bob, but it is how I feel and I am sticking to it

I think is is great you have a healthy rant because we need to be out in the open with these issues. It effects our families, communities, environment, health, education, in fact everything. So let's rant, discuss, debate and try and find common ground to solve many of these problems currently up our noses.

Jamie popped round yesterday and we had a few Speight's and a healthy discussion. Hopefully he will be here for the BBQ on Saturday night. Look forwrad to seeing you.

Yes, indeed this world is in too much chaos. Positive change is needed not only for us but the generation to come. It looks to me that around the world tensions tend to reach extremely high proportions as the year draws to an end and a new year approaches. I suppose the execution of their evil ploy against humanity finds birthing at this time of the year. One would thing that the celebration of seeing the end of year and the joys of seeing a new year where hopes and dreams can be refreshed for the greater good would tank such aggressive tendencies. Has mankind sunk so low in this abyssal ocean of hate? The answer is observable in the environment.

Now can any one human being pull humankind our of this deep well of despair and from those slaughtering camps that kill the body,mind and soul. These are to be found in every nations' nook and cranny. Now fate would have it that Obama must bring new direction to the greatest nation on the planet. His load looks mega heavy on his shoulders to me; for such a man with washboard gait. Much is expected as usual from people of colour when they take on the mantle of leadership. Sometimes I tend to buy into the concept that non-black leaders are more often than not allowed to screw things up in the worst kind of way without having to face imminent consequences. However, I do apologise for going negative here; but looking at the current state of affairs in that 'Star Spangled Nation' how can I resist endulging in a cursory analysis?

Anyways, unlike Presidents-elect before his time, they did enjoy a honeymoon period before their inauguration. No such thing for Obama. So much so that he had to plead with his nation that there is "only one President at a time". Albeit, he still has to hit ground running in showcasing his team that will form the nucleus of his administration so as to allay the growing fears of his nation that has dubbed the current leader as a "lame duck president". Why has this disparity fallen on the first biracial President-elect boggles my mind and I cannot but help thinking that some supernational power is behind this in changing the colour wheel. Yet there is this morbid fear I have about the quatrains of Nostradamus. Will they be self-fulfilling prophesies because evil humankind wants them to come to pass? More than ever I'm praying that his leadership which embraces the "hope and promise" motto winds out as he and his team put sound mechanisms that will work for the betterment of all mankind, now and for future generations. And, that his leadership will sway others from around the globe to embrace the philosophy of Obamaism.

The world needs to pray for Obama and his team to succeed in bringing about positive change to the global arena for indeed we are a global village, inextricably linked as Mother Earth has designed it that way. If Obamaism fails then the world fails as well. Albeit, without compromising the goodly wishes and desires of those people of the United States of America.

Of course, people are generally disgruntled about the performances of their elected officials. They can coherently list all those broken promises and stew in their own juices waiting for a new cycle of elections to vote them out. Then these sweet-mouth talking politicians from the various competing camps pull the wool over their eyes and they not only become temporarily blinded but suffer from memory loss as well. It doesn't take rocket science to see that they fall prey because politicians feed them with fast-food gratifications and the mind-lazy electorate by and large fail to focus on the issues that have far reaching impact on the quality of their lives, and by extension failed to make politicians become accountable for their planned rape of the electorate for their own greedy and self-interest motives. I really don't have much sympathy for a lazy electorate that feeds on fast foods during silly season and ignore the pleas of those who want to point them away from dire consequences of silly season bad habits and the inability to see sheep in wolves clothing as a result of not paying attention. Oh, if they would wake up an educate their minds to important issues then things would turn around in their favour.

I do believe that the success of the United States of America can spill over to the resounding benefits of all nations. Why? Just look at the issues facing the global village. Then look at the issues Obama has earmarked to fix their broken structures such as greenhouse gases, jobs, education, healthcare, proverty, security, alliance building with mutual respect. These issues are not confined to lands of the United States of America. They are universal. Hence, we need all hands at the plough if we are to make the world a better place.

Obama, as far as I understand, promises the kind of leadership that can effect positive change. The United States of America is the World and the World is the United States of America. You don't cut off your nose and spoil your features. So it is imperative that leaders of all nations get aboard on the "Hope and Promise for a better World" express airbus designed specifically for the Global World. Obama needs you and you need his initiative and I dare say he is reaching out to you so join him in rebranding the World not only for Americans but for non-Americans.

My fervent pray is that he succeeds in this laudable and awesome venturesome enterprise. My God continue to guide him and his team in the path of light for the betterment of all people by reaching out to leaders across the aisle and foreign policies initiatives in getting their support and to take decisive action to restore the dignity of the human race.

Thank you Bob McKerrow for invading my thoughts with your blog. It has inspired me to vent my feelings, now I feel a tad better for it.

Last but by no means least, I wish you well in your recovery and much ease in the pain, but pain is good for it tells you that you are with us. The patience that mountaineers like you have, this trait will get you through it all. I shall wait for word when you are in full control of your steps.

It is 5 am. Your ewelcome words of wisdom helps me make a positive start to the day. Poor Barack Obama. We all have such high expectations. Racism and prejudice will soon show its ugly face as people get jealous. We must pray for him and give him every support.My knees are improving but lold man pain doesn't want to leave me. Will write when I have more energy. Thank and Arohanui

Heуa i'm for the first time here. I found this board and I find It really useful & it helped me out a lot. I hope to give something back and aid others like you helped me.