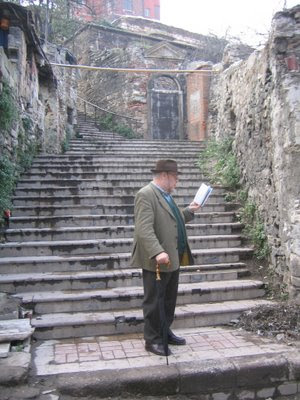 Steve Masty and I spent the year of 1994 in Afghanistan together midst death and destruction. We saw in the New Year of 1995 together and celebrated with a bottle of cheap Russian vodka and sang Auld Lang Syne. How long ago that seems. Steve. J. Masty is a communication advisor based in London . His Time Machine column runs in The Washington Examiner each Wednesday. Steve was a former speech wrioter for Ronald Reegan and has a PhD in Scottish Literature.

Therefore with New Year coming up, I thought this poem from Steve good for New Year. The photo above is the eccentric Steve, with brollie and hat, reading The Times in Istanbul.

When came tha’ day they said they’d pay,
They formed a lengthie line,
Where each did joke that ‘e was broke
An’ needed much more time.

Our leaders, daft, will issue drafts
When ‘ere a rich man whines,
While you, poor sot, will pay the lot
Until the end o’time.
(Robert ‘Third Degree’ Burns)

When Congresspersons mention ‘bailout’
Plutocrats gets the pail out
For they know – everything goes.
The money you
Tucked away
For a rainy day
Tomorrow goes
To some CEOs
Who compound the joke,
Blow it all on coke,
And pricey, uptown hos.
They’re on the beach,
We met their deadline
As you, freezing in the breadline,
Pick your nose – everything goes.
(‘Bituminous Coal’ Porter)

José, can you see
By the dawn’s early light,
We made it to Texas
By tunneling all night.
(Francis Scott Off-Key)


Once I built a hedge-fund
Then it failed out-
Right. Bloomberg called me a swine.
But a pal in Congress
Got me bailed out.
Buddy, I got your last dime.

Once I was a broker,
Had it all, son --
Steaks were never sub-prime.
Thank God for a joker,
Name of Paulson:
Buddy, I got your last dime.
(J.P.M. Organ-Chase)

Set aside sense and dread,
Hail to the noble Fed!
Hear what Bernanke said –
Nothing’s been plundered.

Slash interest rates and get
Deeper than deepest debt,
Spend ever more, but yet
Prices get sundered.

Then start the printing press
Just to inflate the mess
Worse than you feared to guess,
Our days are numbered.

Hail to the Fed Brigade!
Decades-long mess it made,
And turned to marmalade,
The S&P 500.
(Alfred, Lord Elevenson)

Magnificent, just magnificent. Oh,your Scottish blood runs true to form. Amazing, I not only read the poem but sang it as well. And to boot, I got those Scottish words out right, thanks to my elementary teacher who taught me some wellknown Scottish and Irish songs. Your composition mirrors well what is really happening in wall street and with those fat-cats.

I sense your upbeat mood and thank you for snding the vibes my way.

I raise my glass...Happy New Year.

Kia ora Bob,
Fantastic! Tara will love this one as she is pretty anti- fat cat at the moment.
Wishing you a very happy and healthy New Year Bob.
Having dinner tonite with Pohangina Pete which will no doubt be interesting. We will raise a glass to you my friend!
Cheers Bob,
Robb

Fancy you speaking and understanding Scottish. It is a funny poem and captures well the world recession with a wry twist of humour.

You have a very Happy, and Saf
e New Year. I have enjoyed our contact over the year. Warm regards

I trust you had an enjoyable evening with Pete.

Pleased you enjoyed the poem about the fat cats.

Enjoy the rest of the year and a very Happy New Year to you, Tara and the boys.

Hi there, You've done a great job. I will definitely digg it and personally recommend to my friends. I am confident they will be benefited from this site.

my weblog; How To Use Saffron

Link exchange is nothing else but it is only placing the other person's website link on your page at appropriate place and other person will also do same in support of you.

Whether the Custom Research Papers focuses on a single subject or compares two approaches, our Coursework Writing Service comes in with the Cheap Editing Services to complete the homework.