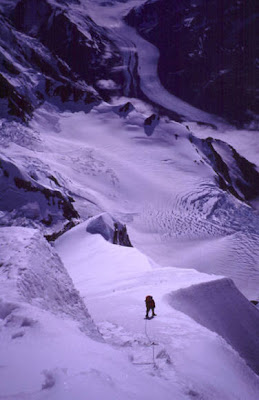 The summit ridge of Mount Cook Aoraki where the climbers are stranded near the middle peak at a place dubbed middle peak hotel.
8.00 am. Thursday Just watched a live interview at 8.00 am with the head of the rescue team at Aoraki Mt. Cook. It raining in the village and snowing higher up. They have called off any helicopter rescue attempts for the morning. The worst scenario could be, no chance of a rescire til Saturday, when the forecast is expected to be settled.
Fears are growing for two Japanese climbers stranded on Mount Cook after the men failed to make contact. The waiting out period brings back so many memories of when I worked at Mt. Cook as a member of the Alpine rescue team in the early 70s. I remember having to wait for days to see whether Murray McPhail and Helen Irwin, trapped of the face of Mt. Sefton would survive the horrendous storm. They did, and so did Mark Ingles and Phil Doole. But there is something strange about the information when you piece it together. Rescuers have seen only one climber and they have not used the radio dropped yesterday.
Rescuers are also worried that only one of the men has been sighted.
It was also revealed that neither climber had a concession to act as a guide in the area.
A helicopter "surfed" in strong winds to drop emergency supplies yesterday but there were concerns the package may not have been recovered.
A radio was also dropped to the climbers, with instructions written in Japanese, but rescuers had heard nothing.
Department of Conservation Mount Cook area manager Richard McNamara said the rescue team today hoped to drop a second radio to the stranded mountaineers.
Kiyoshi Ikenouchi, 49, and Hideaki Nara, 51, have been trapped 3700m up the nation's tallest peak since last week. They have pitched a tent in a crevasse dubbed Middle Peak Hotel.
McNamara said one of the men was again spotted peeking his head out from the tent as the helicopter hovered yesterday.
The same man was spotted when the helicopter first flew over the tent on Tuesday.
McNamara hoped the climbers had the fresh supplies, but could not rule out the possibility that the pack had not been picked up. "The kit landed right right beside the tent; it brushed the tent. The weather was OK the wind was pretty strong, but it wasn't as though they were blinded in a snowstorm," McNamara said.
Making contact with the men was vital.
"It certainly makes the job a lot easier if we can talk to them," McNamara said. "We've got a plan in place and we'll just carry on with that and that really is just to try and make contact one way or the other. If we get a break in the weather, it's likely we'll get another machine up."
Ikenouchi is an experienced mountaineer, having completed several winter ascents of Mount Fuji.
However, Nara has less alpine experience. It was thought Nara may be with Ikenouchi as a climbing customer.
The police area commander for Mid-South Canterbury, Inspector Dave Gaskin, said neither climber had a concession to be guiding in the area.
"That's the thought-pattern at the moment, but we can't confirm that has happened. At the moment, we're just treating it as two climbers climbing together," Gaskin said.
"Obviously, they didn't have any guiding concessions so they weren't allowed to guide in the park.
"If he is guiding, which we cannot confirm and it would be irresponsible to even suggest it, what he would be doing would be illegal guiding, and that happens all the time."
Gaskin said there could be any number of reasons for the lack of radio contact.
He could not be sure the package had reached the men.
"There may be a possibility that they haven't even got it yet and they didn't even realise that it had been dropped, but I would think you'd have a fair idea," he said.
Between 100mm and 150mm of rain was forecast for the main divide today, possibly hampering the rescue. "Bearing in mind (that) to operate at that level you need really good weather, we might not get in there until the end of Saturday." Thanks to the Ch Ch Press for the latest news.
Posted by Bob McKerrow - Wayfarer at 10:01

Thanks for the update, I'm sure there are many prayers going up around the country for the guys up there. Sitting in the torrential rain in Arthurs Pass I wouldn't like to be up topside.

Phil Doole is an old family friend, and I remember as a kid his great big smile (reserved for kids I think) and wooden legs. I remember being stoked when his and Mark Inglis story was in a school journal and I could tell everyone that I knew him.

Its a disgrace and racist that the angle of potential illegal guiding has come out now...surely we could worry about that after they are got down alive.

Kia ora Bob,
Your updates here have been my source of information. My thoughts are with these guys as well.
I agree with Jamie that the media bringing out these aspects of guiding, permits, "foreign" guides, is at the least ill timed, and at the most xenophobic. Lets get these guys off the mountain first before the recriminations begin.
To that end, I have seen so many completely ill equipped and ill informed tourists turned loose on the Tongaririo walk by Kiwi "Tour" operators it makes my head spin. One day there will be a real balls up there and the truth will come out.
Cheers Bob,
Robb

Yes, let's hope they get out with legs, toes and fingers asap. Weather pretty rough though. The circulation system in Mongoloid races tends to make those with the Genghis Khan gene less susceptible to frostbite.

Yeh, the guided/guiding crap can wait.

Good you know Phil Doole too. We both were advocacy managers for DoC and had to share a double bed at a seminiar because we were one room short. I got up at 5 am for a pee with the first rays of sun shining on an amputated leg. I thought Phil had been murdered. When I calmed down I figured out we had both gone to be pissed and he had unstrapped his leg for the night. Jamie, moral of the story is to check people out before you sleep with them.

10.30 am No improvements in the weather so I hope they are tough guys with a survivor mentality. They are going to have to dig deep.

Let's keep our thoughts and paryers going out to them.

It is similar to a wild island with the large space. Iam afraid of that feeling.