Seasonal Shepherds wanted and the Southern Alps are calling.

I just arrived back in Christchurch today after four days in Otipua, a small hamlet near Timaru in South Canterbury. My daughter, her three children and partner have a small farmlet there. I love being in the country and close to the mighty Southern Alps where I spent so many years living and climbing.

As I am recovering from total knee replacements in both legs, I have a lot of time to read. Newspapers have become my favourite reading and the two best adverts I read over Christmas were.

DO YOU WANT TO EARN SOME REASONBLE CASH WHILE WORKING YOUR DOGS ?

That advert embodies what I love about New Zealand, high country, sheep, shepherds and sheep dogs.

The second advert that caught my eye in the Christmas Eve edition of the Timaru Herald advertising air conditioning and telling people not to swelter in the summer heat. The maximum temperature when I read it on Boxing Day was about 14 o C and you could feel the snow and ice knifing through you as it streamed down from the Alps. I am planning to ring the company next week to see if they sold any units.

During the early 70s I lived at Mount Cook and one of my daughters asked me what was my most enjoyable climb. " The South Face of Mt.Douglas at the head of the Fox neve. Anita, that climb had everything. Steep, at the edge of my limits and a lovely route out to Mount Cook over the maion divide," I told her. 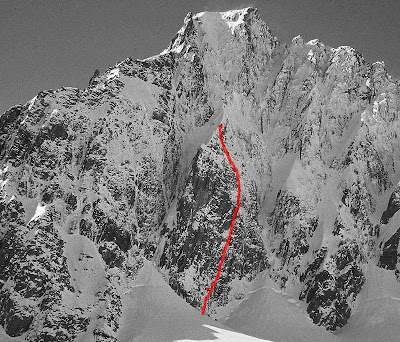 The South Face of Douglas. The red line is a recent route called the Albertown direct. We started on the next gulley to the left and when we reached the ridge in the centre,took the left hand couloiur to the top.

I climbed it with Aat Vervoorn, Jim Strang, Colin Dodge and Etienne Kummer one weekend in early January 1973. It was a steep exhilirating climb and was capped off by a quick crossing of the main divide the following day from Pioneer Hut, Pioneer Pass, down the Freshfield Glacier to Ball Hut. 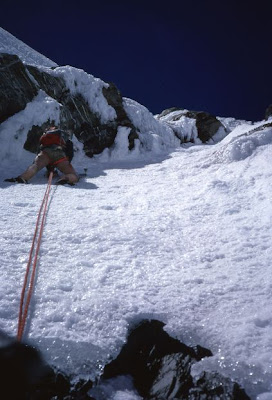 Colin Dodge leading a steep pitch on the South Face of Mt. Douglas. Colin is attired in pink woolen long underwear with a pair of shorts to cover the open fly. Photo: Bob McKerrow 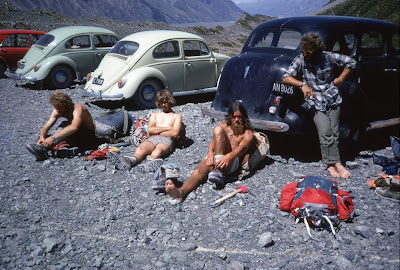 Middle photo: Our party at Ball Hut carpark after the climb. ( l to r) Jim Strang, Colin Dodge, Ettienne Kummer and Aat Vervoorn leaning on an old Oldsmobile. VW and old roomy cars from the 30s were common transport.

Email ThisBlogThis!Share to TwitterShare to FacebookShare to Pinterest
Labels: A climb of South Face Mount Douglas

I remember seeing a photo of this climb in an old Alpine Club Journal from the late 60s but don't remember ever seeing it written up. You gotta put more of these old photos up Bob they are just tremendous pieces of history. How about a coffee-table book of photos from the 60s and 70s. I'd buy it.

I love those old cars. The V-dubs are still running on the roads. That looks like the Ball Hut carpark. No doubt that piece of ground has long since eroded away.

I am in Riyadh at the moment preparing for a permanent move to saudi Arabia in late January. The boy has come a long way from Timaru.

I was thinking about you when i was in Otipua, the place you went swimminmg and bought your eggs at. My daughter has the original bakery on her property in good condition. In fact it is now the sleep out where I lie my head.

Pleased you enjoyed the posting. Yes that is the old Ball Hut carpark, long since eroded away. I have a few thousand of these photos recently converted to digital. What to do with them ? I am certainly happy to post them but is there much interest ? When I was guiding at Mt. Cook, I took and amazingly fit 18 year old female into Pioneer Hut and we did a lot of climbs there. I felt so guilty getting paid. I think we did Hasst, Haidinger and Lendenfeld.

I enjoyed Timoarn and got the feeling the country is coming back to life and the little country schools such as Otipua have over 200 pupils.

The two boys from Timaru and Dunedin have come a long way. Enjoy Saudi Arabia.

Bob, your tales are what legends are made of. I enjoy reading your post, and I love the alps, though I've only done a light trek once, it was breathtaking.

Story telling is important as we are desensitized by watching television where we are not a participant. Blogs are interactive and we can share our stories. Thanks. Bob

Kia ora Bob,
Fantastic! I agree with Gollum, a coffee table book with caption stories would be amazing. I'll sell them for you Bob!
I can't help but recall Ed Cotter saying a bit wistfully that evening how he used to watch Lowe and Hillary, ect., writing in their diaries in the tent after the days climbing and how he never did. Yet now wishes he had as so many of the little incidental memories are now gone. That made a real impression on me. You have the stories, memories, and photos, and I firmly believe there is so much history there to be recorded. If you ever need any help Bob just let me know.
Had a great evening last night with Pete, it is too bad your paths will miss crossing by one day, but that is life. Hopefully one day we can all share a hut, a few we drams, and talk long into the night. Bob, have a great day, my best to your lovely family and best wishes for your continued recovery!
Cheers,
Robb

Yes we both learnt a lot freom Ed Cotter. Having written 3 books, it takes time and you lose money. I think I will be content just to post those yarns on the blog and at least they are recorded.

The thing about the photos (which I came back and looked at again a couple of times yesterday) is the quality. It looks like they were taken from a climb done last week and not 30 years ago. Only the cars and the hair give it away as a photo from the 1970s. The 70's was a golden age for NZ mountaineering and it is just great to see high quality photos from that time.

Thanks for your feedback Gollum. It all helps. I am doing a very historic posting tomorrow which has taken time to gather all the old photos. It will be my last for the year.

27 oC in Ch Ch today. Loving the weather, the lamb, the grass and green-lipped mussels.

One of my favourite books as a kid was "Wall of Shadows" and I remember a Strang from that(there were a couple of them aye?) Met his sister about that time in Jubilee Hut in the Silverpeaks where my mates and I taught each other to tramp. Memory stuck.

One of my mates was the grandson of Paul Powell. Another great mountain writer.

A lot of connections there Jamie. I ckimbed with Jim Starng who is a teacher in Ch Ch. There are about 3 or 4 Strangs who were very active climbers.
The Powell you know must be the son of Conway. I used to let Conway use our artificial rockface at the Arapaepae OPC in Levin in 1990. Small world eh ! ?

This is really interesting, great journey.

Hi,
I came across your blog just from blog lurking! I laughed at your comment about the good old NZ summer temperature! I have experienced it myself when we are over (from Australia) visiting family.
What I loved the best was just reading about your climb and seeing a couple of photos of my uncle Etienne Kummer!!!! IT has made my day! Thank you!

Generic Viagra (sildenafil citrate; brand names include: Aphrodil / Edegra / Erasmo / Penegra / Revatio / Supra / Zwagra) is an effective treatment for erectile dysfunction regardless of the cause or duration of the problem or the age of the patient.
Sildenafil Citrate is the active ingredient used to treat erectile dysfunction (impotence) in men. It can help men who have erectile dysfunction get and sustain an erection when they are sexually excited.
Generic Viagra is manufactured in accordance with World Health Organization standards and guidelines (WHO-GMP). Also [url=twitter.com/iuyjopg]Viagra Sales Market[/url] you can find on our sites.
Generic [url=http://fovunec.freehostia.com]Ordering Viagra to Canada[/url] is made with thorough reverse engineering for the sildenafil citrate molecule - a totally different process of making sildenafil and its reaction. That is why it takes effect in 15 minutes compared to other drugs which take 30-40 minutes to take effect.
[b]viagra use instructions
edinburgh viagra free bananas pajamas
viagra cost
Chemical Name Viagra
viagra for women trial pak
online viagra sale
viagra generic form
[/b]
Even in the most sexually liberated and self-satisfied of nations, many people still yearn to burn more, to feel ready for bedding no matter what the clock says and to desire their partner of 23 years as much as they did when their love was brand new.
The market is saturated with books on how to revive a flagging libido or spice up monotonous sex, and sex therapists say “lack of desire” is one of the most common complaints they hear from patients, particularly women.

It won't work in actual fact, that is exactly what I suppose.